This is how you get married in China. Thanks to our newly married (Congratulations!) guest contributor who’s currently expat in Beijing. I’ll let M take up the story:

Last week I caught a sleeper train to Changchun on Monday night. I was in a room with 5 big fat Chinese men, one of whom snored like crazy. He was in the bunk above me, and I really thought it would collapse, he was so fat.

I got to Changchun, and remembered how cold it was. Warmer than January, but still around minus 12. Met LN and we went to the registry office, expecting to complete everything that day. China is drowning in official paperwork and red stamps. Turns out the red stamp on LN’s “Hukou” (family book that lists your parents, siblings, and crucially what province you ‘belong’ to) was not clear enough. This meant a two hour taxi ride along the bumpy skiddy snowy roads to her home town, to get the bloody thing re-stamped. Her father had to leave his work to come and do that. Then we had a surprise family lunch, and then got the same taxi back to Changchun.

Her dad gave us a small vase that he says is Qing Dynasty (around 300 years old).

All papers in order, we arrived at the office at 3.45pm, to find that they would be closing at 4. We were able to start the process, signing this and that, going from this floor to this floor, and paying some money (28 quid) to the cashier on the 15th floor.

Then we had to go and get a hotel, half the papers done, instead of going back to Beijing. It was a very nice hotel with a big picture of Keith Richards in the lobby. We stayed in and watched The Manchurian Candidate on cable TV.

So it’s not completely clear which day we were married. On the night of the 16th, we were in no man’s land, neither single nor married. If an earthquake had struck, I’m not sure what our status would have been. 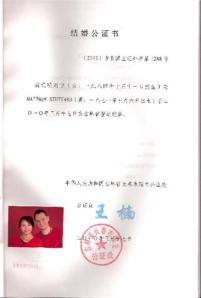 The next day we went back first thing, and signed the rest of the papers. There was a room where we had a photo taken, with a nice bunch of flowers. No, we didn’t want the deluxe gilded photo album for 500Y, thank you.

An old Japanese American was re-marrying his Chinese Wife, after 30 years of marriage. They had had to divorce, as their American wedding didn’t count in China or Japan apparently, and get married again, as they were off to settle in Japan.

Still there were further delays for us. I don’t think I’ve signed my name so many times. They then go off and make a red marriage book for us, with tonnes of stamps in it, like a passport. They like books here. More stamps.  We needed a certified English translation of the document, and were feeling like we wanted more red stamps for our collection. We were asked which “kind” we needed. No idea. We went for the cheapest (I’m sure we can fix anything in Beijing). That was going to take a further three hours, plus a lunch break for the officer.

Off we went to find the Pizza Hut I had seen by the train station. What a very nice Pizza it was. We sat there for over two hours. They had free top ups of fresh coffee. Buzzed up on caffeine, we went back to get our translation. There we are, all done. St Patrick’s Day as well.

Went and got the train tickets (20 minute queue outside, icicle on my nose), 6 hour ride back to Beijing. (LN feeling very ill, Too much cheese, coffee and cake.) Argued with a taxi driver at Beijing who wanted to rip us off, and made it back to our block 2 minutes before midnight, when the lift man signs off and you have to walk up 18 flights of stairs.

It feels good to be married!

Thank you M. And congratulations to you both. (More from him on climate change, crispy silkworms &  outside toilets in Beijing and where to find his own new blog here. In other news:

Patrick Leigh Fermor - pictured as a Major in the British Parachute Regiment during World War Two. His adventures began long before that. His wonderful books came later.

Patrick Leigh Fermor – Pre-eminent among the people I’m reading at the moment. Roumeli – Travels in Northern Greece. Such verve, such sympathy, such an eye, such imagination and such a wonderful way with words. I commend it to you – regardless of whether you have the slightest intention of ever going to Greece.

The Secret of the Cone-Headed Hijabi – a revelation from Jordan.

Basel – That’s where I’m off to now for a bit. The one place where you can stand in Switzerland, Germany and France all at the same time – if you don’t mind getting your feet wet.

5 responses to “Congratulations – Marriage in China”