Yesterday upon the stair

I met a man who wasn’t there

He wasn’t there again today

Oh, how I wish he’d go away (from Antigonish, by William Hughes Mearns )

In this case it was children I met who weren’t there. As well as women and men. In fact a whole village. But officially they didn’t exist. “Never heard of them.” Or so I was told by the authorities. I got them to check just in case. “No such people,” I was told. I sought official confirmation. And got it. Definitely no such people in this country. And by now the man they wished would go away was me.

So naturally, I decided to have a look for myself. And there they were. The country is Romania. The people are Csango – Csángók in Hungarian or Ceangăi in Romanian. The village I stayed in was on the eastern slopes of the Carpathian Mountains, above Bacău (about 300km north of Bucharest) and the region of Romanian Moldavia.

The Csangos are ethnically Hungarian, though they live outside even the further flung pre-Trianon Treaty historical Hungarian borders. So not just separated from the current state of Hungary, but with a mountain range between them and Transylvania too. Their language is an older version of mainstream Hungarian, cut off from the rest of the diaspora.

I learned that the Csango villages tended to be poor in infrastructure and education. A bridge had recently been washed away when I was there. The suspicion was that they suffered official neglect because they were deemed insufficiently Romanian.

Life is a bowl of soya beans

They looked different too. Much more likely to be fair haired than the majority Romanian population. (There are more of my pictures of them on flickr.)

They were also very hospitable and distilled smooth wicked schnapps. Just one of the by products of the lush well-tended agricultural land. It was characteristic to see brightly patterned scarves wrapped round the heads of sunflowers to protect from birds.

Like many rural areas in Romania after the revolution, what they lacked in paved roads compared to the cities, they more than made up in fresh food, a sunnier demeanour and an absence of paranoia.

It was a fair few years ago that I visited the Csango, as part of a freelance aid mission. Someone pointed me to a National Geographic article on the Csango published since. Which meant I wasn’t imagining it all. And now they’ve made it to Wikipedia, which details forced assimilation and attempts to eradicate their language. It also gives a translation for a Csango anthem, which includes the lines:

Bird fallen down from the tree
Abandoned, forgotten

I wonder how things are there with the Csango now? Do they still exist as a distinct group? Or have they been dispersed by poverty or standardised by modernity? Have they finally become invisible?

And is the schnapps still so smooth?

(P.S. Off to Belfast for the weekend if anyone is about.) 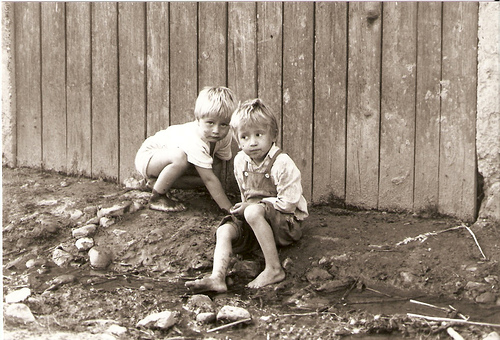