I went out looking for drama, and watched a woman’s life hang in the balance just inches from my face.

I do not schlepp miles into and across London for just anyone. But then Dean Stalham is not just anyone.

I first met him at Wormwood Scrubs prison where he was curating an exhibition for the Koestler Trust, which included his own portrait of Amy Winehouse.

It was art that landed Dean in prison. Back then, he did not create it. He handled stolen art. He was a fence. He was sentenced to three and half years in jail for handling a collection of contemporary art estimated to be worth £6,000,000. Apparently he was caught out when some fake Andy Warhols turned out to be originals.

In prison however, he became an artist himself. As well as painting, he has also become a playwright. He has developed a working partnership with the noted director Pam Brighton.

Dean and Cat Flannery have also created a charity to use art to help rehabilitate ex-offenders and other marginalised people. It’s called Art Saves Lives. It’s on facebook too. They’re running a charity raffle to win some exclusive fine art.  I’ve bought a ticket. I want to win the Anita Klein. There’s a Picasso up for grabs too. For only a tenner. Go on – buy a ticket.

The most recent hot event was the opening of Hot Tap in New Cross – Dean’s new art space and theatre. It’s where the new play that he and Pam Brighton are putting on – God Don’t Live On A Council Estate – opens on July 13th. It is scheduled to run for three weeks, and stars will run for  and runs for three weeks. It stars the cult TV and film actor Dudley Sutton (Porridge, Lovejoy, The Sweeney, Smiley’s People, Eastenders, and loads of films, including The Leather Boys and The Pink Panther Strikes Again.)

Dudley Sutton as Pete in The Leather Boys.

Dudley Sutton as Tinker in Lovejoy.

I felt I had to turn up in person to show my support. So did the people in the pictures (apart from Dudley).

So did broadcaster, journalist and author Will Self. Will says he hates theatres. He says you normally have to hog tie him to drag him through the doors. But this is the ground-breaking art he wants to see for himself.

So did Paul McDowell, the chief executive of NACRO, the National Association for the Rehabilitation of Offenders. Some of his guys painted the  walls of Hot Tap. He says that in this time of economic squeeze, it’s more important than ever that we support innovative rehabilitation efforts like Hot Tap.

So did poet Simon Miles, who rearranged the words of William Taylor Coleridge’s poem Kubla Khan. So Xanadu moves from second word to final word. It works surprisingly well.

(Er… That should be Samuel Taylor Coleridge, of course, as some douchebag pointed out below in the comments. Obviously it was a deliberate mistake put in by me to see if you were paying attention. Well done. You were. I’m not at all embarrassed.)

So did band Little Devils who rocked the house with their blues.

So did theatre reviewer and impressario “Charles Dickens London”. He also puts on great shows about a certain writer. Somebody famous. I forget who.

So did Lindsey Clarke from the Londonist website. You can read her review and see a picture of Hot Tap here. 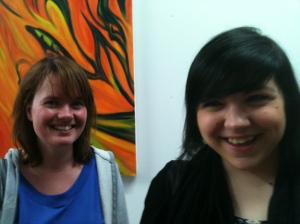 But – there were no chairs. (Dean take note.) Being unable to rest his legs aggravated a friend’s medical condition, so we left during the interval. Which meant I missed the second half performance from Jazzman John Clarke. I was disappointed. The music and poetry were fine, but I’d gone hoping to see some drama.

Sitting on the Tube I had my head stuck in a book. So I missed the woman board the carriage further along and stagger from side to side. I didn’t notice her sit down heavily. I didn’t even see her slump in her seat and then collapse on to the floor.

Yoka the Dutch Diva from the Little Devils band.

It was the reaction of other passengers that got my attention. They stood up and stepped back. A few stepped forward. One pulled the red emergency stop handle. Luckily the train stopped while it was still mostly in the station.

The woman lying on the floor was unconscious. A fellow passenger, another woman, immediately bent over to put her in the recovery position, clear her airway and check her vital signs.

I went to help, trying to dredge up memories of first aid training.

The worst thing in a crisis is for everyone to hang back presuming someone else is dealing with it. It certainly sounds a lame excuse after a tragedy.

Luckily for the collapsed woman, the first Good Samaritan turned out to be a nurse from the London Clinic, on her way home from an evening at a different theatre. This saved her from my well-intentioned but potentially cack-handed intervention. Which was a relief for me too.

The next worst thing is for everyone to presume that someone else has already called an ambulance. So I did that via the platform’s emergency intercom.

Then we waited. The woman had a pulse. But she would not respond to any stimuli. She remained unconscious. He pulse speeded up. Tachycardia. She began to vomit. The nurse held her head and spoke soothingly to her. I wiped her mouth.

The nurse pulled back her eyelids. The woman’s beautiful brown eyes were staring into mine, but it seemed she was seeing nothing.

Was she on drugs? We checked her handbag. Nothing unusual there. We found her ID. So now we could talk to her using her name.

Still no response. The paramedics arrived quickly. “Have you tried pain?” they asked. We hadn’t. A paramedic pinched the woman’s ear, then elsewhere. No response.

She began to vomit again. Not as much this time. But darker. I thought it looked like blood. A man joined us. He said he was an oncologist. He said, “Is that blood?”

The paramedics and the nurse lifted the woman onto to a sitting stretcher, wrapped her in a blanket and strapped her on securely. They took her away.

There are images galore of the drama from Act One. But no names or pictures of the main players from Act Two.

It would wrong and intrusive to give the name or show a picture of the unconscious woman in her distress. And because the hero of the action, the nurse who may have (I hope has) saved the life of a stranger, wants no recognition.

Saving lives is just what she does. I salute her.

God Don’t Live On A Council Estate – the play runs for three weeks from July 13th at Hot Tap. Call Dean for tickets 07788907495 or email  dean@artsaveslives.co.uk

Art Saves Lives gig on July 16th at Quintessentiallysoho at The House of St. Barnabas in Soho. (1 Greek Street, W1) Billy Bragg protege Jonny Neesom is on the line-up.

Big Night Out for Barnardos on August 23rd at the Leicester Square Theatre. Hundreds of tickets are being given to charity volunteer workers to celebrate their contribution. So you can’t go! But you can sponsor a seat. The money goes to Art Saves Lives programmes and Barnardos Childrens Charity.