I’m torn. I don’t know which way to turn. 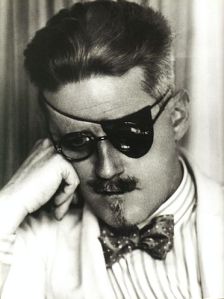 The sky above the port was the color of television, tuned to a dead channel. (Neuromancer, 1984)

riverrun, past Eve and Adam’s, from swerve of shore to bend of bay, brings us by a commodius vicus of recirculation back to Howth Castle and Environs. (Finnegans Wake, 1939)

It’s all because I had my writing style analysed by I Write Like. The prose in my book Blackwatertown is most like the style of another Irish writer of whom you may have heard.

But the prose in my blog http://www.blackwatertown.wordpress.com is most like the writing of William (Cyberpunk) Gibson.

Which way to turn? Who to let out – Jekyll or Hyde? Can you help?

Happily it all helps with choosing a pseudonym. Not sure whether to go for the planteresque Gibson Joyce, or the more challenging Joyce Gibson. Your thoughts?

Of course, what I like is to write like Ken Bruen. I commend the first three pages of his Jack Taylor novel, The Guards. Here are the opening lines:

It’s almost impossible to be thrown out of the Garda Síochána. You really have to put your mind to it.

Funnily enough, Ken Bruen apparently writes like Agatha Christie. Which if you know Ken Bruen tells you all you need to know about these online text analysis tools. (He’s also got a film coming out soon – London Boulevard.)

Filed under art, Influences, My Writing