Euphemisms for… ahem… you know… 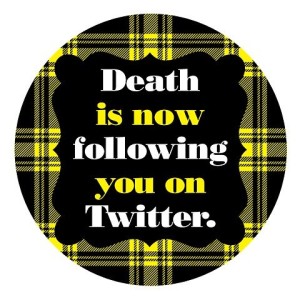 Death in the North is different. We don’t like to acknowledge the event. Down South they’re weeping and wailing and partying round the coffin.

But up North we don’t like to talk about it.

We come up with euphemisms instead.

He’s tatey bread (for those of you lucky enough to have potato bread) or brown bread (for all you unfortunates not born in Belfast).

Somehow I feel less keen on Tír na nÓg knowing it's in Portadown. Still, at least it's not Lurgan.

She’s gone west… Gone west to where? To Boston? To Tír na nÓg?

He’s kicked the bucket (worth a click if you’re feeling bouncy), passed away, popped his clogs, fallen off the perch.

It’s not just English speakers. The Germans, Austrians and Swiss are at it too. Especially the Swiss. One of my favourites is the slightly convoluted biting at the grass from underneath.

My hypothesis is that these deathly euphemisms are a northern Protestant phenomenon. Anyone care to test it?

And while we’re on the subject of death, the historian Tony Judt (“the liveliest mind in New York”) has been mercifully released from his motor neurone disorder/Lou Gehrig’s disease.

He wrote the excellent Postwar on European political, social and economic history since World War Two. I commend it to you.

He lived vividly and was also expert at annoying people, as his Guardian obit explains.

The same edition of the Guardian had this relevant letter:

• Imagine the puzzlement of the antipodean doctor at our hospital when his announcement that “I am sending you home to die” was not at first understood to be relaying the good news that he was sending an elderly patient home that very morning.

Just time to pass on this death-related cartoon. (I thought it might tickle SamHenry of OnMyWatch in particular.) It’s from Virus Comix Welcome to Hell series. (Click on it to make it larger or for more hellishness.)

I guess the moral is – Don’t die a virgin. (And, yes, yes, don’t be a suicide bomber or assume you’ve fully understood the small print. Also important points to remember.)

36 responses to “Euphemisms for… ahem… you know…”