Some fantastic euphemisms in the video: “A response vehicle soon arrives and notifies the felon of their presence.” = blasts holes in their van.

I’ve driven round a fair bit of South Africa, with and without hitchhikers. (The deal is that they get a lift and I get to be nosy. Usually they offer to pay too, but I figure putting up with my questions is payment enough.)

Occasionally road signs warn not to stop under any circumstances. A bit disconcerting. (And there was a very sad story recently, in the news only because it involved foreigners and suspected twists yet to be revealed.) But as far as I’m concerned, it’s been so far so good.

The main problem I’ve had has been getting lost outside the cities. It’s a big country. Lots of space. Not so many street lights. Not so much mains electricity. And not all communities are lit up the way urban areas in Europe or the United States twinkle.

It’s eerie driving into night mist, which you then realise is smog from the kerosene stoves and lamps of the adjacent township inside the grounded cloud. An unpleasant atmosphere in which to live. Bad for lungs and eyesight, especially if you’re a child trying to read and learn. 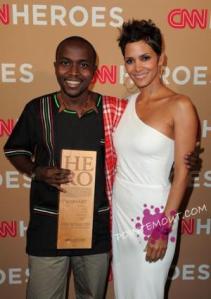 Which is why fellas like Evans Wadongo are trying to solar powered lights. His group is doing it in Kenya. He was recently recognised by CNN – there he is getting an award from Halle Berry.

But getting back to police chases. I’ve only witnessed one in South Africa. That time the police came second – even though they were in cars, on bikes, on horseback and running. It was concerned passers-by who won the race to catch the pair who snatched a Muslim woman’s handbag. Luckily for the thieves, the police were close behind. That meant the bag snatchers suffered only a slight kicking from the cops. If the police hadn’t rescued them from the have-a-go pursuers, their fate would have been much worse. The incident impressed on me how intolerant South Africans are when it comes to crime – and why not, they’re usually the victims, not visitors.

(Thanks coltmonday for the film at the top.)

9 responses to “Imagine if… all police chases were like this”