The biggest snowball in the world, ever.

She's contemplating the snow, he's admiring my taste in music. (Anyone know the artist?)

The snow began as I wandered along and around Portobello Road, past stalls selling printers type, old maps, bananas, crepes or cheese or “antique” candlesticks.

I was chewing the fat with the bloke who sells world music as we listened to The World Ends: Afro Rock & Psychedelia in 1970s Nigeria.

Then the snow began to float down like slow fat broad-winged moths. All movement around me slowed too as people paused to take in the sudden change. I felt both detached from and oddly more conscious of the surrounding streetscape.

Gradually I realised that the reality was that everyone had begun scurrying to shelter themselves or their wares from the snow, slow-falling like ash flowers from a bonfire. The loose contents of the street – people and stalls – bulged and swelled as umbrellas opened, coats puffed out, covers and tarpaulins divided the free space and severed sightlines. Trying to make outdoors indoors.

But amidst the duck and cover, a woman carried on regardless, unmoved. Only her fingers and bow arm were alive with quickness. She faced a stall selling felt hats, but wore no hat herself. Her coat hung on railings. She played on seemingly oblivious, her music a scent passing through the snow air, the few coins in her open violin case disappearing under blank IOUs.

I left her and the city behind. The snow was waiting for me as I walked home through the woods. More came overnight and throughout the morning.

It was too thick for sledging. Or I was too heavy. Even at the steep-sided “bomb hole”. Handy enough for pulling the boys along though – as they snowballed my back. An appreciative bunch they are.

The girls were more independent. They disappeared off for hours together.

But it was the boys who had the biggest snowball. Too big to throw. We and others who added their shoulders pushed and shoved and heaved it along till it got too much. Then we gave it a few kicks and left it – like the cars abandoned at the bottom of the hill. 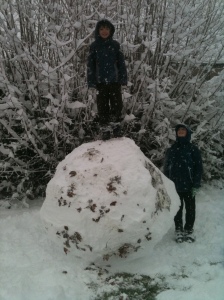 It was the biggest snowball in the world. And if someone else has pushed it further, it’ll be even bigger now.

Can you beat it?

Here are a few more snow pics from the village – taken on a phone.

Filed under In the village, life

12 responses to “The biggest snowball in the world, ever.”