The era of the heavy schoolbag is almost at an end

The era of the heavy schoolbag is almost at an end. That’s according to one of my neighbourhood primary schools. In a letter home to parents, the headteacher noted that more and more pupils were bringing kindles and other electronic readers into class. He acknowledged that, yes, it was the future and to be commended – but could the kids please hold off just a little longer and stick to books for the moment.

Admittedly this is not your average primary (up to age 12) school – it’s a posh fee-paying private establishment. (It’s not where my pair go.)  But it looks like a harbinger of the future for all schools in the UK. The headteacher went on to point out that the school library was costly to maintain in terms of cash and space, and welcomed the inevitable transition from paper resources to electronic books.

British libraries are currently in the firing line because of public spending cuts. It’s painful.  I love libraries and I hate the threat to them. But the medium to long term argument against them is that technologically we won’t need them. All literature will be available electronically.

Sure, some older people find the pace of change too difficult – but that will gradually sort itself out. Some people cannot afford the tech kit to access e-books, but prices will fall – they’ll become the norm and more accessible.

So, OK? No. I fear the loss of the community focal point. I also fear that switching from paper to e-book will further deliterize or illiterize much of the population. Partly this is because of the enhancements that e-literature can offer – interactive diagrams, moving pictures, and audio. Why dwell on the immobile text when you can skip to the all singing and dancing parts? Take it a step further – why read at all, when you can watch. TV already beats reading for many – it’s passive, it’s easier. When books adopt televisuality, it’ll be an admission that they can’t beat them, so they’re joining them instead.

It’s already happening. Why struggle through complicated technical instructions when you can watch a video instead? My son drums along with an instructor on YouTube. I didn’t read the manual when my new phone arrived. There was no manual. Again, I learned how to use it from YouTube. In both these cases the new way is probably better.

So what’ll we do with the obsolete  books? Burn them? Fahrenheit 451. Send them to developing countries? 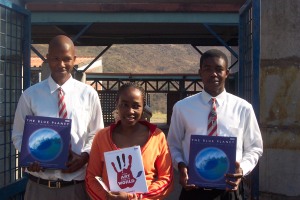 KwaMathanda High School, Umlazi, KwaZulu Natal, South Africa - I took pics to show the publishers who donated books that they had really been delivered.

I once took a shipment of (new) books to a South African township school. (Thanks to the publishers Xpress, Heinemann Junior African Writers Series and BBC World for supporting me in that.) But perhaps in future developing countries will prefer to skip accepting our discards and jump straight to the next technological level – a bit like many African countries are not bothering with landline phones and going straight to mobile.

Does it matter? Paper is bulky, takes up a lot of room to manufacture. But it works. Will future e-reading devices leave us dependent on rare minerals from central Africa or China?

Hearing about the letter home from that school felt like one of those pivotal moments. Sometime in the near future there’ll be a newspaper report marking the first school to actually take this step. At least it’ll be good for the spines of future schoolchildren.