I have discovered the origin of the handbag. And there’s a shock in store for all you fashionistas out there. Two actually.

I made the surprising discovery in Berlin. But the trail goes back far at further – to ancient Babylon.

It wasn’t just you ladies who felt bereft without something gripped in your fist.

Here’s a full length picture of what could be the original bag man himself, showing off his latest to-die-for acquisition. 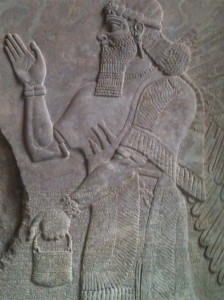 He’s Ashurnasirpal II (883-859 BC). As you can see, he liked to accessorize – bracelets, earrings, a bit of fringing. And before you go casting aspersions, he ruled most of the Fertile Crescent, part of present-day Syria and all of Lebanon.

He could also get quite cross: “…their men young and old I took prisoners. Of some I cut off their feet and hands; of others I cut off the ears noses and lips; of the young men’s ears I made a heap.”

If that’s not enough, just check out those calf muscles. Yikes! (Clearly a keen cyclist in between ear and head removal sessions.)

Ash (well, he’s Ash to me – if it wasn’t for the ears and heads business he could almost be an Ashley), Ash was not the only one with a penchant for bijou chic in the bag department. His wife was a big fan too.

But if you were working security at the airport, would you dare to search this harridan? 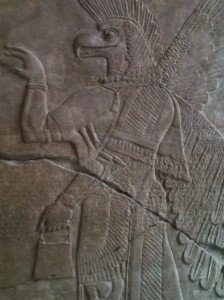 Wifey is really what is known as a winged (simply) divine being. (The headgear though. Bit too much I think. You?)

The bag man and woman are both on show at the startlingly impressive Pergamon Museum in Berlin. If you’re ever in the city, check out the massive Pergamon Altar – which must have left a sizeable hole near present day Bergama in Turkey – and the Ishtar Gate from the Babylon of Nebuchadnezzar II – though as with the more recent mythical weapons of mass destruction, the breathtaking exhibit is not entirely authentic. Wonderful though, all the same.

Sorry if you were expecting something from Germany about bratwurst, Hitler or Checkpoint Charlie, (sorry, not that Checkpoint Charlie, this one). The latter doesn’t look the same at all as when I was last here – no Wall, no wire and no predatory compulsory exchange rate.

And the brutal-looking East German frauleins barely contained by their uniforms have been replaced by a trio of male strippers in US army outfits daylighting between soirees, charging a couple of euro per photo. (I hear their rates rise considerably after dark.) Ho hum, getting old.

10 responses to “Don’t mention the handbag”