Things you don’t expect to see in Harlem

So I was wandering through Harlem (New York) when I saw this sign. I did a double take. Checked my surroundings. Re-checked. Yup, still in Harlem. 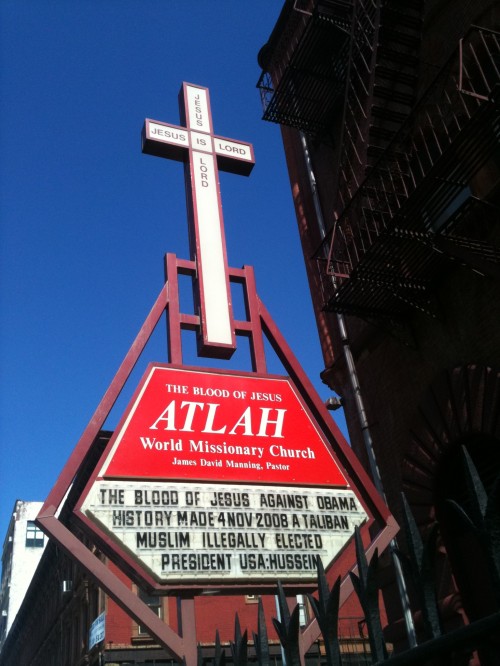 No – the letters on the sign haven’t been mischievously rearranged. And yes – it is some kind of a church.

I knew not everyone likes Obama, and why should they? But this was a little unexpected. Just to be clear, the message reads: The blood of Jesus against Obama – History made 4 Nov 2008 a Taliban Muslim illegally elected president USA: Hussein.

Illegally elected? Presumably they don’t mean the vote count was fiddled as in his predecessor’s first White House win. Guess it must be that Obama’s supposedly not really American. (Some people when they say you’re unAmerican, they really really mean it literally.)

Of course he’s not merely illegally elected – it gets worse. He’s a Muslim too. Hides it well with all that church-going Christ-worshipping religious talk he’s done over the years. Cunning eh?

And – it gets better. Somehow he’s also a Taliban. Got lost on the road from Kandahar to Kabul and ended up in Washington DC.

(In an irrelevant digression – that reminds me of the Knock Song sung by Christy Moore – “At the early age of 38 me mother sent me west. Get up says she and get get a job, says I, I’ll do me best. I pulled on me wellingtons to march for Kiltimagh, but I took a wrong turn in Charlestown and ended up in Knock.” The song even has its own conspiracy theory about NATO landing facilities. Anyway…there’s a link to it at the bottom.)

Sights like these signs are the sort of thing that makes it worthwhile walking the streets just seeing what comes up – even if you’re hobbling as I was, as much as walking.

There was no one in – or at least no one answering – when I tried the church. It was a Sunday, but perhaps they’d done their worshipping earlier that morning.

When I checked round the corner I found a neighbouring church, which had a sign above the door that made me smile. “This church is not affiliated with the church on the corner. We support President Barack Obama.”

Must be a bit annoying to be so close as to be mistaken for the Obama-hating church when you operate in Harlem.

Reminds me of The Life of Brian and the Judean Peoples Front v. the People’s Front for Judea etc.

The Obama-supporting (at least in his capacity as President) church is the Greater Bethel AME Church. (AME = African Methodist Episcopal)

If you find yourself wandering through Harlem in search of something other than religious night clubs, you might want to drop in to the welcoming and interesting Studio Museumon West 125th Street, which currently has an exhibition called Stephen Burks: Man Made – a collaboration with Senegalese basket weavers based in New York and Dakar.

Then skip the long queue for a table at Red Rooster and perch at the bar where you can chat to glamorous older ladies and sample their taster selection of stouts and beer.

That’s it – except for the Knock Song. Locals reported seeing apparitions of the Virgin Mary, ST Joseph and ST John the Evangelist there in 1879. A hundred years later the local priest,  Msgr James Horan took it upon himself to get an airport built to receive pilgrims.

The video starts with an incredulous news report on the origins of Knock airport – followed by the song. It’s only short. You’ll like it. He has a lovely voice.