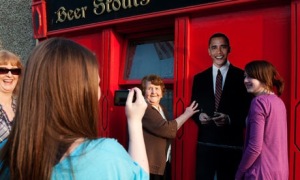 He's not arrived already, has he? Ah dear, the place is a mess, I haven't had time to tidy up yet, fix my hair, sort out the economic mess or anything.

O’Bama’s coming. I know you’ll miss him over there. But he’s returning to his roots over here shortly.

No, not Kenya. Obviously.

But the big question? Is O’Bama the new BIFFO?

He’s due to arrive in Moneygall in County Offaly in just under a month – May 23rd apparently. 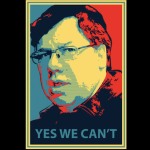 Given O’Bama’s undoubted international political pre-eminence, fallen Taoiseach Brian Cowen‘s claim to the BIFFO title could be under threat.

But surely Ireland loves its newly discovered prodigal too much to dub him BIFFO? Well, except for the forthright Eamonn McCann perhaps. Maybe it’s something the US Right could import a new stick to beat their president.

What does it mean? Sorry – should have mentioned that. According to Cowen himself, it stands for Beautiful Intelligent Fellow From Offaly. In that case O’Bama’s clearly got more right to that than Cowen. But the more commonly accepted meaning is considerably ruder.

Jason Austin and his son Matthew in Moneygall. You see, some foreigners like the USA so much they paint their home the colours of your flag. Don't go expecting it everywhere though.

Meanwhile preparations in Muine Gall continue apace. It’s where (one of) the president’s great, great, great grandfathers came from. And his cousins are eagerly anticipating his arrival.

One of the villagers, Henry Healy, is an eighth cousin of O’Bama (though when you get to the level of eighth cousins, he’s probably related to half the rest of the world too). He says:

At first it felt almost surreal but now it’s becoming very real. He’s coming to Moneygall, he’s coming to my home town and I’m hopeful reality will really kick in if I’m privileged to meet the man and shake his hand.

You have to pinch yourself. I got a bit taken aback when I saw the CIA here two weeks ago. I can only imagine what my reaction will be when the man himself actually lands here in the village.

JFK and Ronnie Reagan made much of their Irish ancestry, but you might suppose that things back home must be pretty desperate for O’Bama if he’s tapping up eighth Irish cousins for a photo opportunity. But fie on you for your cynicism. As the song says, Barack is Irish through and through.

There’s another version – worth just watching the introduction for some other famous “Irish” people. (And then press stop – once is probably enough to hear the actual song.)

So Barack O(‘)bama joins the growing group of US presidents from Ireland. (And when I say “from Ireland”, I include those whose ancestral line passed through en route from Scotland or whose roots are less than clear. But who cares, the more the merrier. It’s not Gospel.)

The next eminently skippable paragraph lists them mainly in order of presidency,with the Irish county of origin or just Ulster (from where so many appear to hail).

So – 24 out of 44 US presidents are really Irish. Kind of. Shhh – don’t tell the world, or they’ll start holding us responsible for the state of the world instead of the USA. Though given the stringent standards used to compile this list, I imagine even more of them were really English, Scottish, French? Dutch? even Kenyan?

7 responses to “O’Bama the new BIFFO?”