Why is it easier to teach kids about Hitler than Stalin?

I’m telling my children about Hitler. But how do I teach them about Stalin?

Looking back to when I was at primary school, I was appallingly ignorant about the Holocaust.

I don’t want my children to be as in the dark.

Sure, I grew up when the Nazis and World War Two were fresher memories. We played war. We watched war films. Gregory Peck, Clint Eastwood, Richard Burton and David Niven were blowing up the Guns of Navarone or going Where Eagles Dare. We read Battle, War, Commando and Warlord comics.

So it wasn’t as though we didn’t mention “the war”. We did all the time. But not the holocaust.

And the Germans were not automatically “the baddies” in our imaginations. We were aware of a fuzzy distinction between Germans and Nazis in the films. The Nazis were the guys in trenchcoats who machine gunned down the Great Escapers. They looked pinch-faced or toad-faced.

But there were good Germans too – James Mason as Rommel, Michael Caine in The Eagle Has Landed (with his IRA assistant Donald Sutherland) or U-boat commander Jürgen Prochnow in Das Boot.

It used to irritate us that the sharp-looking Germans were portrayed as evil geniuses who could never shoot straight. We supported the Indians in Cowboy films too. They couldn’t shoot straight either.

It wasn’t that we were against the Allies – more that the Germans were cool – and the underdogs. We knew they’d be forced to lose and look stupid. (If they were pitted against the French resistance, we switched sides to the new underdog.)

I don’t remember when very young making a conscious link from the British soldiers in World War Two films to the British soldiers barricading streets in the Belfast of my childhood, but perhaps that also muddied the water when it came to distinguishing between movie goodies and baddies. (More on snapper Don McCullin here.)

The only reference to the extermination of Jews, Gypsies and gay people was something my Granny used to say. If I was looking insufficiently fed -in need of third helpings – she might exclaim that I looked like I’d just come from Belsen. (Clearly I didn’t.)

But it wasn’t till much later that the fact and the enormity and the horror of the Nazi holocaust hit home. That embarrasses and appalls me. But since then I’ve caught up – and so has popular literature and  film – writers Primo Levi, Bernhard Schlink‘s book The Reader  (and film), Schindler’s Ark, his List  and, well, his original list – and especially The Boy in the Striped Pyjamas – book and film.

And that carries on to more modern genocide. Definitely worth watching Terry George‘s Hotel Rwanda, or reading Philip Gourevitch‘s award winning We Wish to Inform You That Tomorrow We Will Be Killed with Our Families. (Not just a title as long as a Welsh village, but also a compelling read.)

When I made my first proper trip to  Germany, I visited Dachau concentration camp, near Munich in Bavaria. As experiences go it was enlightening, drab and moving.

A few weeks ago, when I took my own 11-year-old to Germany – a great, friendly, fascinating place to visit – I made sure we visited Sachsenhausen concentration camp north of Berlin. A trip through an Arbeit Macht Frei gate is the sort of thing he needs to know about and to really appreciate. The same goes for any well-rounded properly educated person.

Berlin's Holocaust Memorial - an abstract version of a Jewish braveyard in Prague.

Wandering round Berlin, the Germans seem to have the balance right between sombre remembrance and not inadvertently creating shrines for neo-Nazis.

I’m not sure the rest of the country is as relaxed about dealing with the Nazi legacy. Bus drivers on the route between Oranienburg railway station and Sachsenhausen appear to resent the people visiting the concentration camp – even when – or perhaps especially when they make up 99% of the passengers. Don’t be surprised if they try to avoid bringing you to the correct destination. It’s an ongoing problem according to staff at the concentration camp visitor centre.

So – we all agree the Nazis were bad. Hitler was evil.

But when it comes to Stalin, there’s plenty of scope for people to accentuate the positive. Ah well, he defeated Hitler, they say. Dragged the Soviet Union into the industrial age. Omelets and breaking eggs may be mentioned. (Though as Romanian writer Panait Istrati, “the Gorky of the Balkans”, said of the USSR, he “saw the broken eggs but couldn’t see the omelette.”)

And who dwells much on Pol Pot‘s killing fields, the Vietnamese boat people, or Mao‘s Cultural Revolution and Great Leap Forward famine and slaughter? 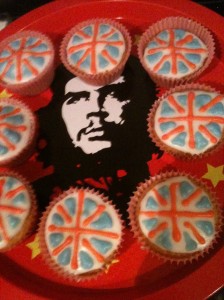 It's hard to find an image of Che you have not seen before. But I think I've cracked it.

Especially when you have the competing romance of Che Guevara‘s martyred superman, the South African Communist Party‘s struggle against the racist government, the Cubans stopping the apartheid regime tanks at Cuito Cuanavale, the doomed No Pasaran against the fascist coup in Spain, the Nicaraguan Sandinistas inspiring students and musicians in the 80s or Salvador Allende‘s last stand on Chile’s 9/11 (1973). Even the men in black pyjamas in their once seemingly endless fight against John Wayne, the Japanese, the French, the Americans. the Chinese and the Khmer Rouge.

It’s on my mind because I’m reading Donald Rayfield‘s book Stalin and his Hangmen. 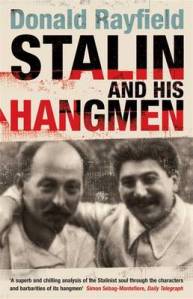 According to Oleg Gordievsky, Britain’s former double agent within the KGB, the book is “probably the most detailed and precise knowledge of Stalin’s thinking and deeds, and that of his most important butchers.” (Often think the emotive use of the word butcher is unfair on meat traders. We have a lovely butcher in our village.) The book is not a bundle of laughs, but it’s very readable – if you don’t mind those long Russian and Polish names.

Here’s a relevant extract which deals with Stalin’s 1928 and 1929 campaigns against peasants in Russia and the Bolshevik empire.

Arrests, deportations and killings escalated, into a holocaust unmatched in Europe between the Thirty Years War of the seventeenth century and Hitler. Stalin’s attack on the peasantry ravaged Russian agriculture and the Russian peasant to such an extent that for perhaps a century Russia would be incapable of feeding itself. It introduced irrational and unquestioned rule by fear and turned people back into beasts of burden. (p148)

But somehow it doesn’t catch our imagination the way other historical atrocities do. Try comparing it to another past evil – the Atlantic slave trade.

The suffering that ensued has few parallels in human history; it can only be compared in can only be compared in its scale and its monstrosity with the African slave trade. But whereas the British, French, Spanish and Portuguese took 200 years to transport some ten million souls into slavery, and kill about two million of them, Stalin matched this figure in a matter of four years.

And how did the world react back then?

We’ve had the Killing Fields film, but where’s the Schindler’s List for the Soviet Union? Or the Boy in the Gulag Pyjamas? I’ve read most of Solzhenitsyn‘s Gulag Archipelago, but the sheer interminable length of it eventually defeated me somewhere during the second thick volume. Colin Farrell starred in a recent movie about Siberian Gulag escapers, The Way Back. But it’s low profile. I haven’t seen it myself.

One film I have seen and that I’d highly recommend is the the excellent The Lives of Others, set in fairly modern communist East Germany. It conveys some of the perniciousness of the regime, but not the magnitude nor the sheer horrific sweep of Stalin’s empire. 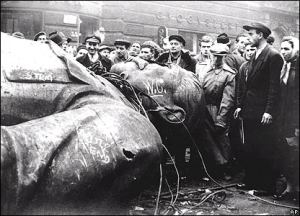 When it comes to the Nazis we have Auschwitz and all the rest.

But where do I take my 11-year-old to really see and feel the reality of Stalin’s legacy?

19 responses to “Why is it easier to teach kids about Hitler than Stalin?”