No – I’m not talking about looking after that island off the Queensland coast. According to the bloke who won the competition to do it, it wasn’t as much fun as he’d expected. It tired him out. Too much blogging too.

And it’s not this massage man either.  As he says himself, he doesn’t even get to belong to a trade union and he has to work all hours.  (Question: Should I have embedded the video in this post? Or is it too saucy? Or just funny? Let me know. Really.  I have to keep tabs on my Charlotte Rampling rating.)

He longs for his own little desk. And no wonder. He must have heard of this person. The person I met last week. The person who really does have the best job in the world.

He – or she – works in a British government department of diminishing importance with nobody you’ve ever heard of in charge. Best not say exactly which one. It’s somewhere round there on the right.

(The “he or she” bit is to conceal his or her identity, though you’ll probably manage to narrow it down. Or will you? Let’s not jump to conclusions regarding sexual preferences.)

His or her office looks over this place on the right. You can see one of Her Majesty’s finest on sentry duty, with somebody in fancy dress posing next him. Probably a tourist or some bloke on a stag party. Presumably the groom who’s been made to wear that shiny hat as a dare.

Actually I’m misleading you. That pair are guarding the front of Horse Guards.

The view I’m leading up to is at the rear of the building, where you can often see a lineup like this. Note the sandy ground underhoof.

I sense you’re feeling underwhelmed so far. Apart from those who get a thrill from the canter and clink of cavalry. But looking out on this day after day… Hardly the best job in the world, is it?

You must have worked it out by now.  Next summer the guys on horseback will be giving way to top athletes like these – seen congratulating each other after a hard won victory.

It’s that new and instantly popular Olympic sport – beach volleyball. I wonder my friend’s office will have a take-your-friend-to-work day? Perhaps he or she will be able to rent out the corner of their desk for perching purposes.

The military parade ground is due to be transformed into an arena like this.

Wouldn’t it be awful if he or she was transferred before next summer?

I can guess what some of you are thinking? Isn’t it appalling the way some people trivialize a serious competitive sport?

Absolutely. I don’t how the organizing committee for Olympic beach volleyball who set the dress code for athletes can live with themselves either.

I’m sure my friend with the view will be writing in to complain.

Interestingly, I’ve noticed that the men’s beach volleyball teams are not compelled to compete in speedos. Funny that. 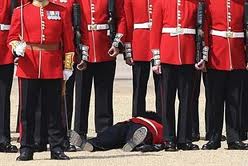 Though perhaps the sight of bouncing budgie smugglers at close range might be too much for the stalwarts on security duty.  Pass the smelling salts.

7 responses to “Is this the best job in the world?”