Are you SURE you want to take his name when you get married? 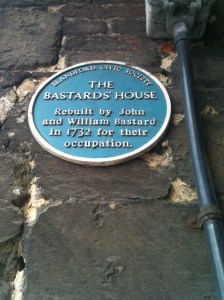 I know some women can’t wait to change their surnames when they get married. They’re so keen you wonder if the possibility of a new identity was the main marriage motivator?

But what if you were marrying into this family? I noticed them when I was off camping at the weekend.

How would you handle that awkward conversation about not taking his surname with your fiance? Or would you embrace it as well as him?

If you did decide to take it on, wouldn’t it be annoying to mistakenly think you were being called every time someone in earshot got cross about something? (“Oh sorry, I didn’t mean you, it was that other ….. I was talking about.”)

Though you’d be able to take conversations in unexpected ways. “Oh, he’s a right …… that one.” “Is he? Wonder if we’re related?”

It would be fun writing angry letters to the newspaper. Would they dare to print them?

And what about going through customs? Or even worse – security checks. “Name please?” “…….” “I think I’ll have to ask you to wait here Sir for further questioning.”

School roll call would be hilarious, or excruciating – depending on your sense of mischief.

And would you anticipate sympathetic treatment from a doctor, army officer or priest of this surname? I wouldn’t fancy my chances before a magistrate from that family.

As well as the Dorset architects, the family also included one of Britain’s most notorious politicians, some American cousins who changed the course of World War Two (like many emigrants to the new world they changed their name to fit in), a Scottish branch of the clan who tended towards being a bit overweight and a comic strip child. 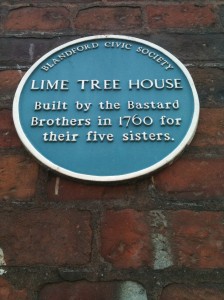 But enough about the boys in the family – except to note that they clearly doted on their sisters. (See right.)

Hmmm… Wonder how the girls felt about the whole marriage-name change question?

19 responses to “Are you SURE you want to take his name when you get married?”