Portrait of the Artist (with credit cards) 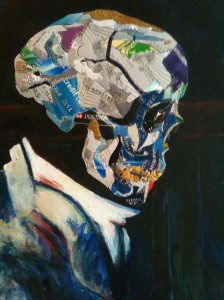 This face caught my eye.  It’s a detail from the painting below. And the artist was larking around nearby so I was treated to both the faces he made and the one he wears.

There may well be meaning in the painting, but it just struck me as clever and imaginative. Which could also go towards summing up the area of London where it was hanging. I saw it inside Time for Tea on Shoreditch High Street.

Nearby was a big painted message urging passersby to – Let’s Adore and Endure Each Other. Yes. Let’s.

And there was a shop selling paramilitary teapots and facial decorations for your light switches. In other words, all the essentials.

Which got me thinking: Which rules – east or west?

East London (where I’ve been wandering of late) is clearly cooler, younger, livelier, edgier, more creative and more interesting than the leafier, more sedate west end of this world city. True – you can buy wine with Stalin’s picture on the bottle. But if you were an ineffably cool jazz singer, where would you choose to live? It’s obvious. In the EAST. Probably on a boat. (With or without a bookshop attached.)

But hang on. There’s more to the world than just London. Jim Morrison sang The West is the best. Was he right? 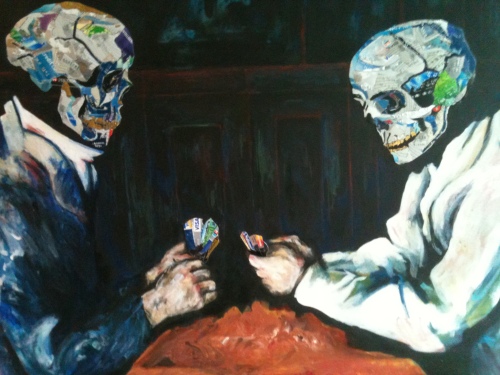 A culture of success puts little value on the unsuccessful - Christopher Robin, 2011, credit cards and acrylic on canvas

What about the WEST Bank of Paris? And WEST Belfast is cooler and more cultural, with better bars and murals than the east of that city. The WEST coast (of Ireland) is warmer and more musical. Isn’t that the same with Manhattan island? What about north America as a whole?

And who could prefer Copacabana to Valparaiso? One may well be the hottest spot north of Havana where music and passion were always the fashion but those lyrics can’t compete with the rousing ring of we’re bound for Valparaiso round the ‘Horn. Generously nozzled crooning v salty wave-washed sailors. There’s more to life than string bikinis on the beach, isn’t there? Which one did Che visit? Well, there’s your answer. The WEST wins again. 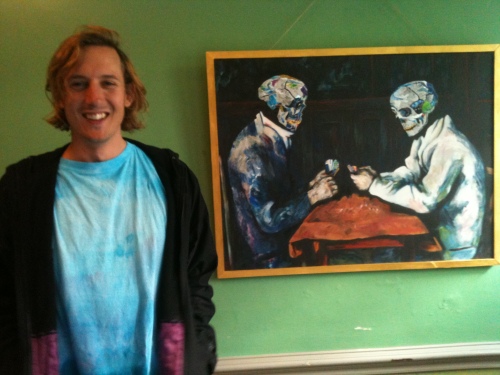 Horace Greeley didn’t cheerlead the USA’s manifest destiny by urging Go East, young man. No, he was pointing WEST. And cigarette billboards urged Ossies to Test the WEST when the Berlin Wall came down. But then the EAST of that city became cooler. 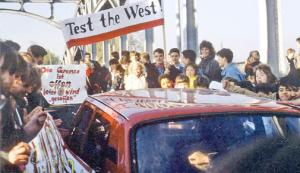 Timbuktu v Samarkand? Both rundown cities of the imagination, but the WEST wins.

Rome v Byzantium?Perhaps I’ve been led astray by Patrick Leigh Fermor’s theory of the Helleno-Romaic dilemma in his excellent book Roumeli – that the Greek psyche is a zone of perpetual conflict between the glory that was once Athens and the realism that was Byzantium. Been to Athens, but not yet to Istanbul. So I’m choosing EAST.

And which direction should those country roads take you? Through John Denver’s West Virginia, Mountain Mama – or via Michelle Shocked’ red clay back roads in Memories of East Texas. (I couldn’t find a clip of it online. Odd. Her official website is here.)  Difficult one. Never seen him in the flesh. Met her. She wins. EAST.

So far I tot it up as twice as many to the WEST as the EAST. So was Jim Morrison right after all?

Which rules for you? East or West?

Or perhaps the cut-up credit cards at the top have left you so traumatised you’ve had to go and lie down.

27 responses to “Portrait of the Artist (with credit cards)”