The day I met… Frederick “Day of the Jackal” Forsyth

Just imagine, you finally get to meet your idol, only for it all to go terribly badly wrong?

Perhaps they disappoint you and disillusion sets in? Perhaps you throw up in their cumberbund? Or perhaps – like me – you manage to make an awful first impression.

I’ve received some great entries for this blog’s The Day I Met… competition. Some funny. Some poignant. All you need to do is email me your story – doesn’t have to be long – and I’ll publish it on this blog – a new one each Wednesday as long as it lasts. The competition details are here. But really, it’s as simple as emailing me at paulwaters99 @ hotmail.com (just remove the spaces in that email address). If it’s a funny story – all the better. And you’ll get a prize – the book of your choice from the list I’ll send you. But never mind that – just think of the prestige. Aaah.

And – just like junior army officers leading the charge on World War One trenches – I wouldn’t ask you to do something I wasn’t willing to do myself. So I’ll kick off with…

The Day I Met… Frederick Forsyth.

This was not how I had imagined things would go. Since internationally famous best-selling writer Frederick Forsyth popped up on the local scene, I’ve been secretly nurturing the hope that we’d have a chance meeting – over a pint in the local perhaps, followed by a quiet chat and erudite conversation about commonly held interests – the BBC, Africa, writing and local goings on.

Who knows where it might lead? Not to the disastrous encounter of the other day. That wasn’t what I had in mind at all.

And why wouldn’t we get on famously? After all, since Bill the window cleaner tipped me off that he was here, most people’s reaction to FF’s arrival has been “who?” Only I, I realised, was truly appreciative of his work.

And I’m not just talking about The Day of the Jackal – a classic and inspiration for two films (one also a classic, the other dire); The Odessa File– another good one (which also inspired a decent film) with a better and more credible twist than Robert Harris’s (otherwise very good) Fatherland; and all the others since. Not to mention his short stories. He’s been mightily prolific.

But also his columns in the Spectator, his reporting from the Biafran war of secession from Nigeria and his departure from the BBC over the way the conflict was being reported.

But despite spending every waking hour in the pub and every sleeping hour propped up against the gatepost of his estate – the chance meeting never occurred. He probably mistook me for a dead badger. That’ll be why he didn’t invite me in.

Hmm… Backtracking for a moment to make a correction. That last bit sounds both sad and stalkerish. It never happened. Nor do I ever touch the devil’s buttermilk (aka alcohol). Except when necessary. However I do occasionally stagger past his entrance when out running.

So as I was saying: The chance meeting never occurred until…

Until an enterprising representative of the village fayre collared the great man at a supermarket (I know! Doesn’t he have people to carry out such mundane tasks on his behalf?) and secured his agreement to officially open the festive proceedings.

Happy days! It was clearly written in the stars that our “chance meeting” would occur on a sunny afternoon at the fayre. All I had to do was stay off the Pimms and not do anything stupid. How hard could that be?

Aye, there’s the rub. Not doing anything stupid clashes with the “sure why not” part of my character.

Children attending the fayre were encouraged to make and wear special hats. And I am lucky enough to have a creative genius living with me, who had ideas for not one, but two hats. Which she duly created.

The only problem was, she had only the one head. Another was needed. Mine. And sure why wouldn’t I be proud to wear her next whatever outlandish creation?

I could have given this post a different title: Two heads are not better than one.

But as we prepared for the hat parade I was proud to model one of her millinery masterpieces. She wore the one with bananas and other fruit and veg. I wore the Moshi Monster-based “Simon Growl” titfer 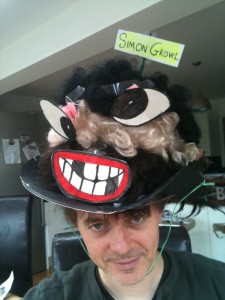 Not many other adults were wearing unusual hats. Fainthearted (or sensible) bunch – though there was a bloke fully kitted out as Cap’n Jack Sparrow, head to toe. Respect. And quite a few mothers and fathers in straw hats – which, quite frankly, don’t count at all. Wimps.

So off we paraded. The fruit stayed aloft. No marchers were run over by impatient drivers. So far, so good.

Until it was time for the judging to begin.

As the wearer of such wonderful headgear, it was no surprise to find myself prodded and pressed by small children to join the line-up. And how could I pass up the chance to show off the handiwork of my resident creative genius?

Scallion hair for the hat - "Summer is here everyone celebrate!!!!! Yippie!!!" Now that's what I call attention to detail. And still good to eat.

Then, possibly out of misguided kindness to me lined up there with the children, an organiser decided that there should be an adult category. Well… The excitement of those around me was barely muted. I was nudged and bumped and all but congratulated in advance.

According to a straw poll of eight to eleven-year-olds I was a shoo-in for victory. My hat – which they knew really wasn’t my hat, but made by one of their own – was a startling object.

And for once, I too was feeling quietly confident of victory. And why not? I was the only adult competitor. No sign of Cap’n Jack Sparrow. It was in the bag.

"Dear oh dear, can't we find some other entrants?"

The judge – Frederick Forsyth – looked from right to left and back again. He pursed his lips. He frowned. He looked again. He frowned some more. He looked to be in some pain. He whispered to the organiser. There was an announcement – a megaphoned plea – calling for additional entrants. A couple of pretty ladies shuffled over to show willing.

Frederick Forsyth perked up. He smiled. He looked again from right to left and from left to right. I saw he’d made his decision. First prize to the pretty lady in the straw hat. No, to be fair, it was a straw hat with a ribbon.

She looked mildly bewildered and pleased. But at my waist-level there were gasps of outrage. The girls were not happy.

Meanwhile I was left to reflect on how I’d blown my chance of impressing Frederick Forsyth. All he would ever remember of me, with a twinge of pained disapproval, would be a fool in a bizarre hairy hat with eyes and a mouth.

Maybe if I shave my head completely he won’t make the connection should we ever meet again.

But if I haven’t blown my chance I’ll eat my hat. Actually not mine, hers – the one with bananas on it.

Filed under In the village, The Day I Met... Competition