The Day I Met… Billy Bragg 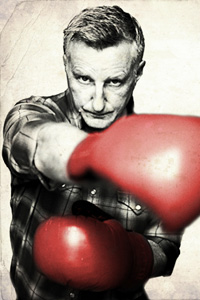 (Ta dah!) It gives me a queasy feeling in my stomach to introduce the latest entry in The Day I Met… Competition.  Here’s a taster:

We had to stop at a hotel to collect someone. A performer. Someone whose first album I owned. My first discovery of political music for myself. Even my dad rated him. Squeak!

But then it all goes wrong. The story is from Speccy and her Me, Mine and Other Bits blog in Belfast.

I’m trembling a bit. This is about a musical hero of mine. An inspiration (of which more below). A singer songwriter. If you’re from somewhere that has not yet had the pleasure of Billy Bragg (also at his official website), he’s an unashamed leftie. The “Bard of Barking” has sung against the right-wing press, Thatcher, the arms industry, war as an easy option (he had a brief spell in the army himself) and racism; in favour of trades unions, international solidarity, sexuality in its various manifestations and the humane treatment of asylum seekers; and about loss, relationships and love.

But he’s mainly known as being incredibly right-on. (Which is an odd term, as it generally means being on the left, in a politically correct sort of way.) Right on – and fun. And a good song writer. I’ve seen and heard him live quite a few times – every time a good ‘un.

But hark! Perhaps the Braggster is not quite as saintly as he seems… Here’s Speccy’s story:

The Day I Met… Billy Bragg

Way back in 1984, I was starting my 2nd year at university. My friend J had an admirer. He liked her charm, wit, personality and striking good looks; she liked his his ability to put us (have speccy mate, will travel) on guest lists – free entry to musical events. A match made in the students’ union.

We were very excited when, on our way to a freshers’ ball, we had to stop at a hotel to collect someone. A performer. Someone whose first album I owned. My first discovery of political music for myself. Even my dad rated him. We were going to collect Billy Bragg. Squeak! Not yet properly famous, but he was famous to me. The real live Billy Bragg. In the same Ford Fiesta as me.
He played in a small bar upstairs (the main attraction were The Bluebells). Just him and his guitar, playing to me, J and no more than about 12 others. It was great. I felt like I’d been at something special.
Some time later, we got to hang out in the ‘green room’. Random Bluebells had random groupies. We got chatting to Billy. Well J did; I was more wimpish and star struck and had not yet discovered the emboldening power of alcohol.
J was particularly interested in the opening line of ‘New England’: “That lyric reminds me of something, where did you get it?”
Billy (who knew about alcohol) : “From my brain dear, from my brain.”    **Billy Bragg used ‘dear’ alert**
J (who knew about alcohol and being patronised): “Oh, you mean you have one then?”
A huffy parting of the ways ensued.
J was thinking of Paul Simon’s lyrics at the start of ‘Leaves that are Green’ : “I was 21 years when I wrote this song. I’m 22 now, but I won’t be for long.”
Billy’s lyrics for ‘New England’: “I was 21 years when I wrote this song. I’m 22 now but I won’t be for long.”
Obviously to suggest to Billy in 1984 that there was any similarity between his lyrics and anyone else’s was a problem. We hadn’t even got as far as realising the direct lift. If only we had, then we could have been arrogant and know-all back to him.
Despite the good music and the good politics, it took me years to get past ‘dear’ and the huffing. Thankfully I did, because about 10 years ago he played in the pub at the top end of the road, to me and about 300 other people in a tiny crowded room. It was fabulous and somewhat surreal. Almost everyone I knew was there, and when he played too loud, the lights went off.
I’m still a fan.

Oh no! Say it’s not true! (I also feel a bit thick because the lyric lifting is complete news to me. Thanks a bunch for exposing me to the harsh truth.)
You’re talking about the man who inspired me and my mate Kevin to form a busking duo in Belfast called The Amazing Bragg. (Bar the name, it bore absolutely no resemblance or relation to the real musician. We relied on front. And a tape player hidden behind the biscuit tin we used to collect money. But that’s a story for another day. So to continue with my current agony…)
Oh – the pain of disillusionment! Well, a slight twinge anyway. I still  like him. He’s not scared to take on unpopular causes – like asylum seekers. And if the most appalling revelation anyone has come up with is that he once called someone “dear” in a patronising way – as opposed to marrying his underage niece, dying of drugs, drink…. – I guess his right on credentials are relatively intact. And whatever else, he did write Levi Stubbs’ Tears…
After reading Speccy’s story, you may want to send in one of your one. Great. Email it to me at paulwaters99@hotmail.com – hopefully it will involve a celeb (international statesperson or Z-lister – the choice is yours) and be a bit funny. If it’s calamitous, that’s even better. (If you want a longer version of the rules click here.) And you’ll even win a glittering prize. (OK, it’ll be the book of choice from a varied list.)
Speccy chose John Le Carré’s novel of espionage Smiley’s People. Good choice dear. Er, love. I mean, madam. Cripes… Happy reading Speccy and thanks very much for your story.
You can check out past celeb encounters by clicking on these links:

There’ll be a new The Day I Met… next Wednesday. And next week will feature a very controversial female politician. (As Rolf Harris would say: “Can you tell who it is yet, kids?” Bet you can’t.)

But you’re also welcome to check back in before then too. I’ll leave you with Billy Bragg around the time Speccy met him – UK miner’s strike era.

Filed under Guest Posts, The Day I Met... Competition

20 responses to “The Day I Met… Billy Bragg”