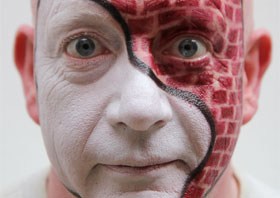 Arthur Magee - Ambassador of the humane to humanity

How could you not love a face like that? It’s playwright and tour guide Arthur Magee. He has a bee in his bonnet about the type of tourism that goes on in Belfast – sometimes called “terror tours”. You know the sort of thing – here’s the Falls Road, here’s the Shankill, here’s where he was shot and she was blown up.

Anything wrong with it? Maybe not. Can be educational, even respectful. And it’s clearly part of the history and undeniably internationally known. I’ve even done it myself in an informal way for foreign mates who, to my surprise, had studied Northern Ireland at college. Odd to think of yourself as a laboratory specimen.

But though Norn Irn’ers have been known to revel in their notoriety and believe – or demand – that the world revolves round them (“Never mind the fall of the Berlin Wall – what about the Apprentice Boys wanting to march across the Ormeau Bridge!?!) – you can imagine that it can become tiresome to feel that visitors see you solely in the context of the Troubles. A bit like being in a zoo too. In the cage.

Which is why Arthur Magee has come up with an alternative. And Brendan Deeds has written about it on the Culture Northern Ireland website. I liked it, so I’ve copied it here:

A few years ago a friend from out of town convinced me to join her on a bus tour of Belfast. In the company of wide-eyed visitors from Dayton Ohio, giggling Spanish teens and a polite Japanese couple, we were driven past gable walls, Peace walls and the docks, where the ‘unsinkable’ Titanic was built. Seeing visitors spoon fed these dated signifiers of Northern Ireland’s capital city was depressing. Belfast is much more than a synonym for conflict and tragedy… isn’t it?

Arthur Magee believes that Belfast and its visitors are being severely short changed. For the past couple of years he has trodden the sodden streets of the city with a walking tour that he insists introduces tourists to an unseen Belfast, one in which bullets, bigots and that all too sinkable ship are all but irrelevant. 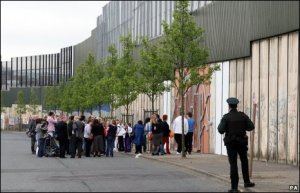 Who needs the Taj Mahal when you have peace walls on the tourist trail?

Now he has adapted his award-winning walking tour for the stage in his one man show, There’s More to Belfast Than Walls. ‘The term Peace Wall is a piece of journalistic spin,’ Magee asserts. ‘The Peace Walls are monuments to hatred. One day I saw a coach load of tourists take photos of the Peace wall on the Shankill Road as if it was the Mona Lisa and that upset me. I thought, “There’s more to Belfast than this.” That is why I started the tour.

‘I’m not denying the problems in Belfast. We are prisoners of history here but there is so much vibrancy in the people and that is what is one of the city’s greatest assets. My walking tour doesn’t focus on the murals or conflict, mine is about bridging the divisions. It is as much about the people who come here as it is about the city itself.’

Magee has quite a history himself. During the height of the Manchester music scene in the 1980s, for instance, he was signed to the Ugly Man independent record label, worked with Martin Hannett, and can personally claim to have brought The Stones Roses to Northern Ireland.

Magee is proud of the fact that There’s More to Belfast Than Peace Walls isn’t funded by the Arts Council. And he is keeping the DIY spirit of punk alive and well in his show. ‘The Presbyterian Church on Rosemary Street,’ he observes, ‘is arguably the most important building in Belfast, if not the whole island. There is a radicalism in that Presbyterian Church that is alive today. Its earliest members included Edward Harland and Thomas Andrews, not to mention Thomas McCabe, who opposed the formation of the Belfast Slave Ship Company. ‘It also part-funded the building of the first two Catholic churches in Belfast. It’s rare for certain religious denominations to fund others, but for that to happen in Belfast, a city known for its religious intolerance, is nothing short of a miracle.’

It is places such as the Rosemary Street Presbyterian Church that are often overlooked by the mainstream tourist trails. By focussing on these sites and landmarks, Magee encourages his audience to learn about and enjoy a wider narrative of Belfast’s history. Whilst highlighting some forgotten or less known aspects of the city’s past, Magee also tries to reinterpret the new Belfast developing and growing before our eyes.

Gone are the days when the only construction in Belfast centred around the re-building of oft-bombed Europa Hotel. These days, the cranes are never out of view. The Victoria Centre, the new Lyric Theatre, the Mac and Titanic Visitor’s Centre are symbols of a new dawn for the city that is so sorely scarred by the violence of its recent past.

‘I like some of it,‘ Magee comments, ‘but it’s almost like we had a catalogue called Make Yourself a Modern City and we thought, ‘What’s this, item 232? Spirit of Belfast? We’ll have one of those”. It’s alright, but there is so much more we could be doing, like building a more fair society with better hospitals and schools. ‘Belfast used to be called the Boston or Athens of the North, but what is it now?’

Magee answers his own question with a quote. ‘I’m always reminded of the line by George Bernard Shaw. ‘We are made wise not by the recollection of our past but by the responsibility of our future”.’ Each city is a palimpsest. It is as much a document written by a people than it is bricks and mortar. Each successive generation shapes the space, and their stories are written in its architecture. For too long our stories have been of division, but Belfast is changing.

Yes, tourists will always want to see the murals and the Peace Walls, says Magee, but there is now so much more to see. ‘Every time I go to a songwriters night in Belfast,’ says Magee, ‘there is someone who blows me away. I was in Manchester in the 80s and can say that there is more musical talent in Belfast now than there was in Manchester then. That is just the music. I am sure it’s the same in the other arts.’ But not the politics.

While Magee is proud of the passionate, creative spirit of the people in his home town, he is critical of the political institutions in Northern Ireland. ‘Our politics are like the Peace Walls, divisive. We need to engage with each other and invent a new tradition.’ So what about There’s More to Belfast Than Walls? Described by Magee as ‘the walking tour for people too lazy to walk’. It promises a look at the city’s past and present through stories, jokes and maybe even a song or two. ‘What I’ve realised this first opening weekend,’ says Magee, ‘is that the show is changing and evolving. Every night has been different so far and will probably keep going that way. People can expect to be engaged, to learn some interesting things, have some fun.’

Unfortunately this run of Arthur Magee’s stage show is over now. (I blame the appallingly slow pace of posting by the bloke who writes this blog.) But his tours are still going. And they sound jolly good. Here’s a wee film of Arthur…

30 responses to “There’s more to Belfast than peace walls”