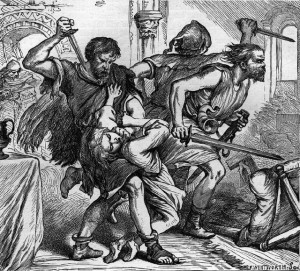 That's me dying the first time - on stage.

My great disappearing act took place at the height of my professional theatrical fame. For the princely sum of £5 and a bottle of Fanta (a night? or was the £5 for a week?) I trod the same boards the feet of Liam Neeson, Ciarán Hinds and Adrian Dunbar had before me. I played the eldest of Macduff’s sons in Shakespeare’s Scottish play at the Lyric Theatre in Belfast.

My main role was to die defending my Mum against the king’s hired killers – a bit of dramatic struggling and swooning after being stabbed. But it wasn’t all action. Oh no – I had lines too. A couple of Yeses and then that immortal exclamation.

Thou liest, thou shag-hair’d villain!

That’s what everyone remembers from that play, isn’t it? Never mind all that hubble bubble toil and trouble or being steeped so far in blood. Oh yes.

On the final night of the run, the usual murder happened. (Obviously I could have beaten the killers if I’d wanted, but I had to let them get away with it for the sake of the play. Just wanted to make that clear.)  The murderers fled, leaving the bodies of me and my mother and brother strewn across the stage. Then the lights went down completely, leaving the stage in complete darkness to allow us to drag our carcasses off stage.

As usual, I quickly nipped through the side drapes, but instead of finding myself in the wings en route to my bottle of Fanta, I almost immediately faced a wall. Very puzzling. I’d somehow gone wrong. But as I turned to find the correct exit, the light came back up as the play continued.

The light filtering through also revealed both my location and my predicament. Instead of stepping into the wings, I had nipped into the small space in front of the emergency exit. To go forward would mean opening the emergency doors and potentially setting off the fire alarm. To go back would mean suddenly appearing at the side of the stage, before diving into the wings at the correct place. I couldn’t do that. It would be too distracting for the audience and might throw the actors off. I also knew that there was no other moment of complete darkness.

So there I stood. The audience just feet away. Sitting there. No room for me to sit on the floor – my feet might have stuck out under the hem of the curtain.

That particular play is supposed to be Shakespeare’s shortest tragedy – and this version was shorter still. But it didn’t seem that way.

Meanwhile backstage, a lot of head scratching was going on. There was one more bottle of Fanta than there were boys to drink them.

Eventually… finally… Birnam Wood rose to Dunsinane and the cast took their bow. Out I popped, but not really in the mood to take a bow. Rather keener to make it to the toilet while there wasn’t a cue.

And there ended my professional acting career. It was my last act.

I think it means I scored a first in theatre – dying both on and (emotionally) off stage.

If the Lyric is reading this – you owe me a bottle of Fanta.

Meanwhile, the final curtain has come down on one of the world’s great performers – Christopher Hitchens. I did some work with him once – back when he had hair. It was a time when he was taking knocks in Britain for backing the war against Saddam Hussein and his own unrelenting campaign against what he had termed Islamofascism. He was also seen as “difficult” – a euphemism for too drunk to be trusted. I found him to be straightforward, polite and professional. He was such a great polemicist. And hey, anyone who takes a pop at my Granny’s old colleague, Mother Teresa, can’t be all bad, can they?

Here’s an interview the Hitch did with the BBC’s Jeremy Paxman while undergoing treatment for his cancer. It’s almost half an hour long, but worth taking a break from click, click, clicking to watch.

This is a post for the Loose Bloggers Consortium on the topic – Act. You can find some other LBC members listed in the right hand column of this page – just scroll down a bit – then click on the links to find out what they make of the subject.

19 responses to “My great disappearing act”