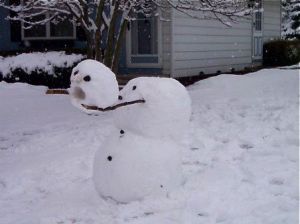 They couldn’t wait to cut the heads of carefully crafted snowmen. What could be so urgent to necessitate the introduction of saw to sculpted neck?

Saving the grass apparently – according to Hounslow Council.

Even as war, hunger and pestilence roam the world, somehow a decapitated snowman deserves his place on the front page. And in some parts of London like Chiswick, there’s been a wholesale decaptitatory crackdown.

Even my Fosters-drinking mate at the railway station has disappeared – and he was fine this morning. Gone without trace.

And for what? It’s snowing again.

Sure, it may be laudable to clear pavements to save people from slips and broken hips. But who begrudges a snowman?

As we’re having to wait for the sun anyway, why not have the cheery companionship of a snowy sentinel to share the icy times while they last.

We’ll be wading through mud, slush and rain soon enough.

According to the Daily Telegraph, even the Queen has been drawn into the row. Well, Mrs Queen anyway.

She said: “There were at least 50 snowmen plus igloos that children and loving parents had struggled to build.

“The ice sculptures were rapidly melting in the bright sunlight but these men were being employed to kick them down. One had a saw and was sawing their heads off.”

Mrs Queen said that she was “shocked” and asked them what was going on.

“It is to protect the grass was the feeble reply. What is going on? What are we paying our taxes for?” she said.

Aha – we could be on to a scandal here. Has a snowman beheading levy been snuck with the last council tax rise perhaps? Let’s hear what the Local Government Association has to say for itself.

The Local Government Association, which represents councils in England and Wales, said that nowhere in its health and safety guidelines does it say that snowmen and igloos pose a threat. A spokesman said: “It is certainly not the policy of local government to persecute snowmen.”

So who is behind this spate of snow creature head chopping? Unconfirmed reports that I have just made up, say a man closely resembling Aled Jones was seen running from the scene of the latest decapitation, muttering Try walking in the air now, you frigid carrot-nosed Foster-drinking ball of ice.

This has been a post for the Loose Bloggers Consortium on the theme wait. You can find what the other members came up with by going to the right hand side of the screen and scrolling down to their links.