It was THIS big… 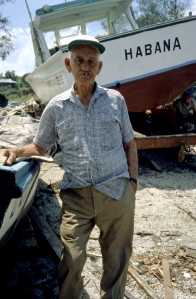 Gregorio Fuentes. His rod was too big to fit in the picture.

My adventures with the fish of the sea (as per the topic chosen by the Loose Bloggers Consortium) in five casts.

1. Fishing off the north Antrim coast. In a proper boat. Made of wood. We run aground. Luckily my Dad can tow us off. It’s that shallow. And we’re very light.

3. Some people hate fish. Like a housemate in Cardiff. She’s a vegetarian biker, but eats fish. Because she hates the slimy scaley beasties. They deserve to die.

4. Best place for fish in London? Kokeb Ethiopian restaurant on Roman Way, off the Caledonian Road. N7 near Pentonville Prison. (Hmmm… okay, it was tilapia which is a fresh water fish, so strictly speaking the line got tangled and this casting doesn’t count.)

4. (For real this time. Ease back and… Flick the rod forward.) Best place for fish anywhere? On the Venezuelan coast of the Caribbean Sea, inside Henri Pittier National Park, at a make-shift barbecue between the track and the water. Red snapper.

5. Fisherman with the biggest, ahem, rod? Gregorio Fuentes, who I meet in Cojimar, east of Havana, Cuba. Reputedly the Old Man in Hemingway‘s The Old Man And the Sea. He shows me his rod. It is indeed massive. I take it in both hands and try not to put out anyone’s eye. All Gregorio catches these days, I realise, is cigarettes from foreign blow-ins. I don’t smoke, but I always have a packet of fags while I’m working away, just in case. Later I hear that Gregorio has gone. Fish across the Caribbean Sea rejoice. But Gregorio’s rod lives on. So just watch yourselves fishies, or the next we meet could be on a plate.

In a moment you’ll go to the right hand column and scroll down to the links to the rest of the Loose Bloggers Consortium talking about fish. But in the meantime, here’s a song from my childhood. You’ll never guess what it’s about…

You can hear the songwriter, Ewan MacColl’s version here.