Proof that the Blue Peter garden lives on.

But would it have been better to let it die so we could remember it as it was, rather than resurrect it like this? 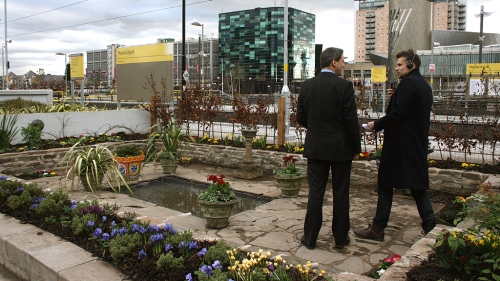 The Blue Peter garden - dug up from the back of TV Centre, London and transplanted to a plot next to the tram stop at Media City, Salford. Former Blue Peter presenter Richard Bacon, wearing headphones, asks some bloke: "How soon before we can go back inside/down south? It's bloody cold out/up here and nostalgia won't keep me warm. Assuming there was any. Which there isn't. Because of the wind."

Having camped one night in the original Blue Peter garden with lovely tentmates Stephen K Amos and Kaye Adams, I find this picture sad somehow.

But at least it reunites Richard Bacon, the second greatest* Blue Peter presenter ever and my personal favourite, with the Italian sunken garden.

But I’m sorry Richard. You can’t go back.

You just can’t go back.

* John Noakes of course. As if you even had to ask.

And what mention of Blue Peter would be complete without the third greatest Blue Peter presenter of all time – Lulu (seen here in action with John, Valerie Singleton and Peter Purves.)

(Actually, to be fair to Val, upon reflection, she has to rank above Lulu.)

16 responses to “The Blue Peter garden”