And it’s thanks to Padmini – to whose odd request I responded.*

This is big. Possibly even as big as appearing on Good Morning Ulster in days gone by.**

I’m now an internationally famous megastar as featured in The Hindu newspaper in India – the country’s most prestigious publication.***

What you may find ironic, bizarre, hilarious or some other word – is the reason that I’m in The Hindu.

Best just have a look for yourself. 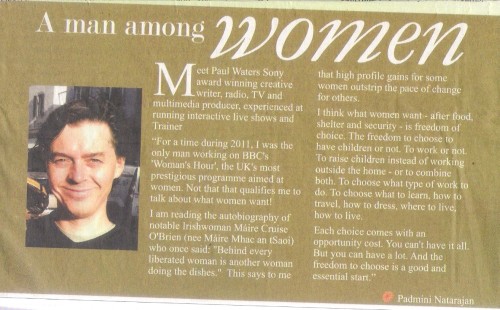 As you see, my wisdom is as boundless as my photogeneity.****

(I wonder can anyone guess or see where that photo was taken? Getting the right country would be very impressive, the city downright spooky.)

I think the following photo conveys my feelings about all this.

* She’s not just an actor. She’s also a writer with access to (ahem) the most exclusive big names.

**Because what is fame anyway? When people who know you or your family hear your name – that means something. When it’s people who don’t know you – does it really mean anything? Unless it’s something really really big – like taking up residence in the White House, playing for Ireland (OK Top Boy, OK – or England), wearing a dress held together by safety pins, taking elephants over the Alps or… Or appearing in The Hindu! Wahey. Though best of all is being known in the streets where I live.

*** Featuring me automatically ensures the newspaper deserves that description.