On location with Amy, Vijay and Vikram 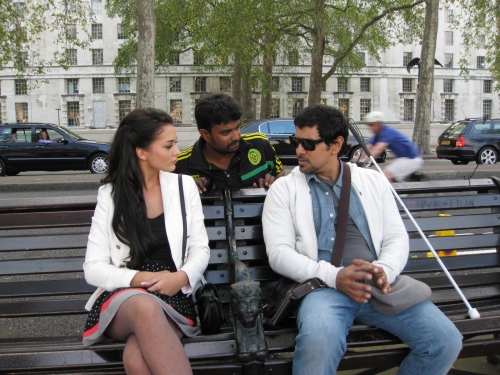 It may not be as lavish as Cleopatra – but there they are – Manx-born Amy Jackson on a Thames-side bench with Tamil star Vikram. That’s film director AL Vijay in the middle, speaking quietly to them. (He always speaks quietly.)

If you look very very carefully, you might be able to tell that Amy has brown contact lens in, to make her look more Indian. She’s playing Vikram’s half-British half-Indian love interest.

They were filming a song sequence for this Tamil version of The Bourne Identity – Murder! Vengeance! Action! Singing! Dancing!

Okay – I’ll admit it. This particular scene doesn’t look so exciting. Lots of sitting around. Hanging around. Lying around. waiting around for something to happen. Getting in the way of riverside joggers. And troops of French schoolchildren.

Oh the glamour of it all!

But what you don’t know is that Vikram’s stick is really a sniper’s rifle and that Amy has a Kalashnikov propped up behind the bench. Any minute now it’s all going to kick off. Big time. (Probably. I had to nip off before they let rip.)

I’ve now scored my hat trick in meeting Tamil film stars. But neither Amy Jackson nor Vikram can compare to my first and untoppable encounter with the Queen of Tamil stage and screen – Padmini Natarajan. You’ll find her here.

16 responses to “On location with Amy, Vijay and Vikram”