She should have married Arthur

She’s just realised she should have married Arthur instead of Philip.

The Diamond Jubilee could have been so different, if only HM Queen Elizabeth II had married miners’ leader Arthur Scargill instead of Philip.

That’s the view from Daley Bread – scene of my unfortunate mistake and then my embarrassing retraction. I’ve since realised it’s a fount of wisdom about the world.

And the view from behind the sandwich counter is this:

The working class have been squeezed out of the picture. It could have been so different.

Or would it have been? Arthur Scargill and Prince Philip are not as different as you might think.

Blimey! It’s like The Prince and the Pauper. They’re doppelgangers who could have swapped places at any point over the past 40 or so years.

Who knows? Maybe they did! 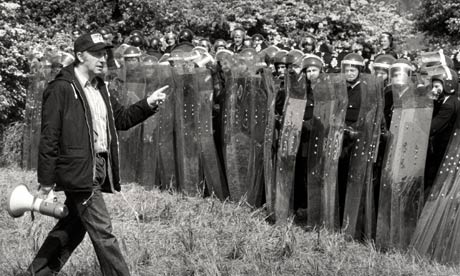 Arthur? Or is it really Philip?

Perhaps that was Philip striding up and down in front of the line of police riot shields. Look closely now. Squint. You see it? Can’t rule it out , can you? Which means Arthur could be the one to blame for those slitty eyes comments.

It also suggests that the Queen has been… Well… Indulging in a bit of monarch a trois.

(I thought I had invented that phrase. Oh clever me. But someone else got their first. And has actually managed to photograph a monarch a trois happening. Bit unexpected. I won’t mention which monarchs they are. And as this is a family blog, you’ll have to click here to see the photo.)

Of course, neither Arthur nor Philip are a patch on the Princess Elizabeth’s dashing escort in Belfast.

30 responses to “She should have married Arthur”