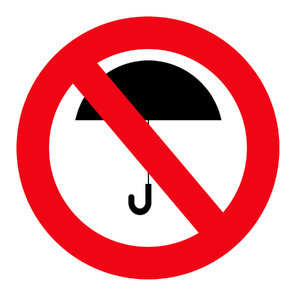 A headline to bring joy to the hearts of millions.

A headline that might even, maybe, persuade me to vote for Boris (should he try for a third mayoral term instead of going for prime minister).

A headline that is long overdue.

And completely true. But, sadly, only in my imagination.

But it makes sense, doesn’t it?

Are umbrellas evil? Clearly yes. Not sure? Picture a giant corporate golf umbrella on a crowded street. Exactly. But in case specifics are required.

The case is clear. They should be banned. With some exceptions for special cases. C’mon, I’m lovely really.

But how to enforce the ban? Simply arm an army of young urchins with high-powered water pistols – a cross between Sherlock’s Baker Street Irregulars and Mao’s young Cultural Revolutionaries – and unleash them on anyone in breach of the ban.

For more serious offenders – the corporate golf umbrella-types for instance – the most appropriate course might be to insert and open the offending item. What do you reckon? Too lenient?

Having addressed the vital question of whether or not umbrellas are evil. Answer – Yes.

I can now address the issue I should have been talking about – this being a Friday. The question set by the Loose Bloggers Consortium: If you can cure one leper, why not cure them all? The answer: Can’t think of any reason why not myself.  (Unless you’re busy washing your hair that day… or waiting for the price of the cure to rise to reach more profitable levels… or needing to shift your stock of crutches first…) Am I missing something?

This picture, taken in Bangladesh, comes from Steve McCurry’s awesome photo blog. I love it. For more pictures of people with and without umbrellas in the rain – click on the photo above.