The brave boy band of the Royal Airforce on beating Hitler

Writers are supposed to think of innovative ways to promote their writing these days. Short films are the latest thing. Here’s a good example that is advertising a thriller by a writer I like, Stuart Neville. It’s for his second book Collusion.

I got into reading Stuart via his earlier book The Ghosts of Belfast (in the USA) or The Twelve (in Ireland and the UK). It was excellent and based on an inspired idea. The only problem with his promotional film from Collusion is that, exciting as it is, it doesn’t really reflect the book itself.

Though thinking about it… Maybe that’s not a problem after all. As long as people reading the book.

Which means I could have found the perfect film for my own ebook The Obituarist. It features the heroes of a daring air mission to turn the tide of World War Two – now retired and facing a devious threat from an unexpected quarter. But how to convey the devil-may-care courage and insouciance of their younger days?

This film does it.

If you’re unlucky enough not have already encountered the Horrible Histories crew, I strongly commend them to you. Thanks to Barry Turley for giving me the idea. (The cheque is not in the post. Have you seen the price of stamps these days?)

And thanks also to this great blogger on the UK and US media – Bill at Trading as WDR – before whom the titans of telly tremble and the top ranks of radio reel. Thanks for the plug Bill. 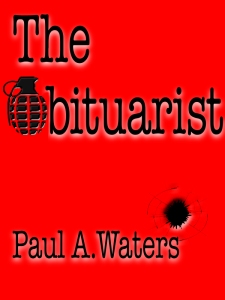 By the way, you can download the ebook of The Obituarist most cheaply from here at Smashwords for various devices or PC or Mac – or for a few pence or cents more from Amazon in the UK or from Amazon.com here for kindle etc. Ah go on. The pain will be fleeting and strangely pleasurable. The joy will be long lasting.