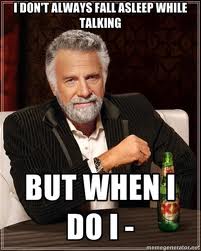 Of those five, the cliff and under the wardrobe were most comfortable, though the wardrobe had the aid of alcohol – so perhaps that shouldn’t count.

And I haven’t included all those occasions were I draped myself over another person and promptly dropped off, mouth agape, careless of the proprieties.

My top five are a bit of a laugh. But I’m conscious of the very many people trying to find rest or respite in odd, uncomfortable or dangerous places because they have – or feel they have – no better alternative. I’ve known some. It’s horrible.

I also know some people trying to improve things for people living in doorways, corners, hostels or sofa-surfing. They work at London Pathway developing integrated healthcare for homeless people and rough sleepers. I predict that we’ll be hearing more about them in future.

You can find out where the other members of the Loose Bloggers Consortium perched, burrowed, slumped and otherwise slept by scrolling down the right hand side of the screen and clicking on their links.

* Quare fellas is an alternative name for r-a-t-s. A wise Manx lady explained to me that the tradition on the Isle of Man is to avoid using the proper name of those creatures, because “if you say their name, they will come.”

** Actually, I cheated. That wasn’t me. He was a dear colleague who was reading the sports news on BBC Radio 5 Live while short of sleep. How we loved playing the clip of him nodding off while speaking again and again. Unlike him, it never got tired.

27 responses to “The oddest place I’ve ever slept…”