The Devil made me do it 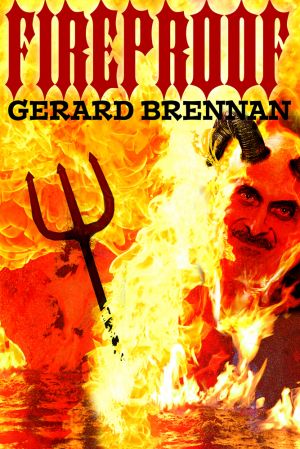 How often do you encounter – or read – something completely fresh?

This is fresh. Or to be more accurate – it’s sulphurously original.

Fireproof is the latest book by Gerard Brennan (he of the blog Crime Scene NI – scroll down the links on the right hand side of your screen to the Reading & Writing section).

The Devil reincarnates Belfast killer Mike Rocks to establish satanism on earth – starting in Northern Ireland. And surprisingly, you gotta have sympathy for the Devil, because Mike Rocks is a cocky so-and-so, cheeking Beelzebub at every opportunity despite repeated savaging by demons.

Rocks starts recruiting/evangelising cider-drinking corner boys, before moving on to curious Goths and covetous Yuppies. He tries to win an endorsement from a disgruntled Catholic bishop. And as long as he keeps the boss down below sweet, Rocks can also pursue his personal vendetta against the men who killed him – sending him to Hell in the first place. Keeping Rocks company on his mission are a wanton wannabe hitwoman and a spiteful demon.

It’s funny, romantic, brutal, well observed and oddly true to life – despite the reincarnation and taste for the demonic. Fireproof is also thought-provoking on the whole question of religion. But it wears this lightly enough not to get in the way of an unpredictable and thrilling plot.

That’s the thing about a story so original. You soon realise that all bets are off. Somehow this story manages to make anything seem possible, while remaining true to its own logic. It doesn’t cheat. It’s crazy, but it works.

The Belfast setting and banter is spot on too.

Here’s a wee bit of it. Mike Rocks, Satan’s envoy, visits a tattoo parlour to have the yakuza tatts on his current body touched up and finds the inker, who’s called Robin, to be open-minded.

“To be honest, I just like the imagery. I’ve read a little about paganism though. It’s quite interesting.”

“You ever do any reading on Satanism?”

“Yeah. I’ve been working hard to try and shake that kind of misconception.”

“A representative of Lucifer. I was sent here to build a Satanic Religion.”

“Okay. Why did Lucifer think a tattoo parlour was the best place to start?”

“Actually, I was sent to Belfast. The tattoo parlour was my idea. You guys are usually quite open-minded.”

Fireproof is published by BlastedHeath – if you want a copy – click here to find more information on it and links to the UK and US Amazon pages.

With all the sockpuppet malarkey these days, I hereby declare my interests/links/whatever. I’ve met Gerard Brennan. He’s dead on. I like everything he’s written that I’ve read – including Wee Rockets and The Point. And I didn’t pay for my copy of Fireproof. Gerard’s agent (sheesh! he’s got an agent) sent it to me for nathin. But I would have read and reviewed it anyway. (So you missed out on £1.99 there.)

9 responses to “The Devil made me do it”