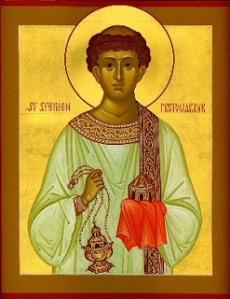 First he gets stoned to death – one of the first Christian martyrs.

Then he gets a designated day just after Christmas so no one notices it.

Then – to add insult to injury – it’s renamed Boxing Day, so he lapses still further into obscurity. (Though in Ireland we’re still holding out to some extent.)

No longer! In the spirit of Stephen’s Green, I bring you this St Stephen’s Day / Boxing Day / Christmas song. Best to skip ahead to one minute in – he waffles a bit and has a false start.

I wonder would any reader fancy explaining about the third creature sharing the 26th of December – the wren? Maybe you have direct experience? Any wren boys out there?