Should children be allowed to drive? 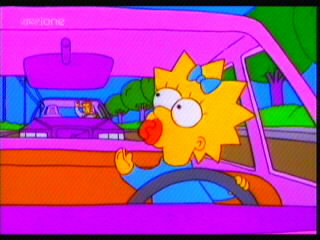 Who would you rather have driving? Little Maggie – or Homer?

Why are children not allowed to drive cars?

Soon, I soothed him, soon…

But he was not deterred. And in fact went further. Says he: “Assuming they can pass the driving test, it’s actually more sensible for children to drive than adults.”

I was a captive audience. I couldn’t escape. I was driving.

But more importantly – is he right? And if not, why not?

Luckily this is all hypothetical, because I doubt he’d want to be seen behind the wheel of my car. But help me out here, I need 8 arguments to fight back with. Actually 9 would mean I win.

C’mon fellow adults. Help me keep 13-year-olds off the roads.

24 responses to “Should children be allowed to drive?”