How to come back from being burned at the stake

This isn’t about the furious row, nor the racism (real or imagined) that preceded it, nor the burning at the stake that followed it. It’s about the unexpected good thing that happened next. END_OF_DOCUMENT_TOKEN_TO_BE_REPLACED 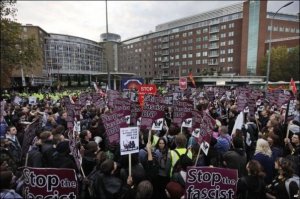 Just another day at the office, pictured by a colleague. Are they e United Against Facism protestors, cross about the BNP’s Nick Griffin appearing on Question Time. Or the queue for Jonathan Ross? Or Harry Hill?A TV Centre tour? Or the bus queue. Hard to tell.

But all the fuss of the day reminded me of The Man They Couldn’t Hang and their song “The Ghosts of Cable Street”.

Or this version if you want to see the band.

The Banned / A New Name

Everyone’s getting banned. Aung San Suu Kyi is banned from leaving her house arrest in Burma. Ousted Honduran president Manuel Zelaya is banned from leaving the Brazilian embassy in Tegucigalpa. And now I’ve been banned from using the computer on Sundays. I proudly stand with my fellow bannees. But Sunday is past. So I can now mention a couple of things.

Macken’s previous name was too close to living people, who might themselves be displeased, or might themselves incur the displeasure of others incapable of differentiating fact from fiction. Bad for the health and all that.

Macken is a conflicted Catholic policeman serving in the RUC in the 1950s. After farcical encounters in the foothills of the Mourne Mountains of County Down, he is demoted from sergeant and banished to sleepy Blackwatertown near the Irish border. His arrival has far-reaching consequences: It wakes the place up; stirs up the murkiness round the mysterious death of the police officer he is replacing; sparks a new border war; and begins a sometimes dark, sometimes funny, wild ride through the politics of sexuality, sectarianism, loyalty and what it means to belong.