A pair of brown eyes 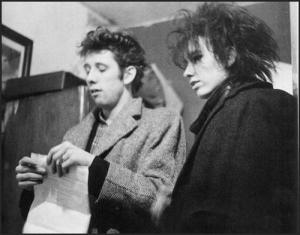 In days gone by, The Pogues never failed to cheer me up.

We go back a long time.

I remember sitting on top of a wardrobe in the Crescent in Belfast watching Shane MacGowan beat out a fast tempo with a biscuit tin lid on his bonce.

Or the time the UDR kind of pulled us over because the car was bouncing excessively to Sally MacLennane (er… that’s the song rather than any young lady who may share the name). It was odd, because we were stationary at the time. Perhaps it just seemed we were moving. Or they weren’t so keen on The Pogues.

Or the time I was rescued by Jim from a melee in the Ulster Hall. (Dunno why. It was all fine. Just a bit lively. No idea what he was worried about.)

Or the time in Dublin that “Country” Jem Finer accused me of chucking a television out their hotel window. It wasn’t me at all. (Though I’m not so sure about the fella I was with.)

Or the time I bumped into Cait O’Riordan coming out of the gents in the Olympia Theatre. (No, nothing like that. She was with Elvis Costello.) She sounded like this.

Or all the times The Pogues were a guaranteed remedy for melancholy.

So here they are. They have cheerier songs, but this was the best video I could find. Even with a song of death, regret and mutilation they still lift my spirits.

Anyone got a guaranteed spirit-reviving song they like to offer as an alternative? (And don’t suggest All Kinds of Everything by Dana – it won’t get through.)