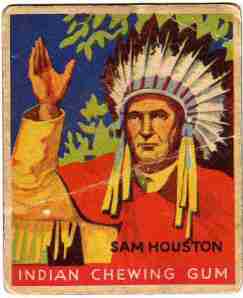 Sam “Remember the Alamo!” Houston – who used to be an American Indian, according to the Childcraft Encyclopedia.

The Biography volume of the Childcraft Encyclopedia (or was it Cyclopedia?) – the obscure pasts of famous Americans.

For a while it was… The Hitchhiker’s Guide to the Galaxy by Douglas Adams. I found it in an odd place. “It was on display in the bottom of a locked filing cabinet stuck in a disused lavatory with a sign on the door saying ‘Beware of the Leopard‘.”

Then it was… Lucky Jim by Kingsley Amis – happy endings, but don’t read while hung over: “He lay sprawled, too wicked to move, spewed up like a broken spider-crab on the tarry shingle of morning. The light did him harm, but not as much as looking at things did; he resolved, having done it once, never to move his eyeballs again. A dusty thudding in his head made the scene before him beat like a pulse. His mouth had been used as a latrine by some small creature of the night, and then as its mausoleum. During the night, too, he’d somehow been on a cross-country run and then been expertly beaten up by secret police.”

It is (and has been for a while)… A Time of Gifts by Patrick Leigh Fermor – robust and exquisite. (And I want part 3 for Christmas.)

But the best books I’ve read lately are The Little Friend by Donna Tartt and We Need To Talk About Kevin by Lionel Shriver. I was late getting to both of them. Both arrestingly good. (Never mind the reviews to which I’ve linked.)

But if I really really have to choose one, from the very very many I value and return to, it would be END_OF_DOCUMENT_TOKEN_TO_BE_REPLACED