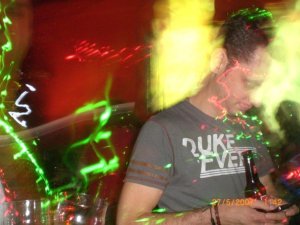 Our man in Beijing.

Our Beijing correspondent M reports on UFOs, outside toilets, climate change and why China is not the global warming villain it’s made out to be:

“Beijing is a strange old place. There are some immensely rich people here, alongside the mostly closeted expats. There are many smells and sights on the streets, and several Unidentified Frying Objects.

I’ve recently come back from Jilin, meeting fiance’s family (yes fiance now, got that sorted pretty quick). Jilin is in the far north, and was bloody freezing, minus 20. Dinner was served the day we left, and it included a massive plate of crispy silkworm, which I just had to pass on. They were big fat things and had been sliced in half.
I saw some some really basic living conditions up there too, mostly pig farmers or shopkeepers plus their families living in tiny one room houses with smoky fires that burn all day long under concrete beds. No fridges, no hot water, no showers, toilet out the back… so to speak (a hole in the ground at minus 20 IS an experience, let me tell you).
Healthcare is not what it should be, and some of the children are a sad sight.

I could fill a programme talking to them all about the changes they are undergoing. A couple of brand new blocks have gone up in this small town, with all mod cons, and they are buying them up fast at less than £10,000 a piece. The western lifestyle is coming, and you can see exactly how much more energy the new places use than the old simple existence, with their showers and central heating and water down the plug hole.

I am not a brainwashed citizen (yet), but the West’s criticism of China after the Copenhagen summit was unfair. Nearly everybody here, bar the city dwellers, lives in conditions that most of us can’t even imagine spending one night in. They are happy, but when it’s offered, they all want what we take for granted. They are incredibly thrifty and energy concious on a personal level. It’s the horrible gigantic coal power stations that they’ve got to find a solution to.

China as a country is now the largest emitter. But per head of population, they emit a fraction of what a person in the USA emits. It’s the West that needs to reduce its energy use, or at least change its habits.

Anyhow, enough of the polemics, I am having a great time.

Snow here too. Volunteer neighbourhood street clearing gangs roam the estates. Our door has been knocking at 8am the last two mornings, and we’ve politely ignored it and stayed under the covers….

What about me, eh? I got settled pretty quickly. We are in a nice suburb, and it’s mega cheap for everything if you avoid all the western bars, clubs and restaurants in the centre. Something I’ve mostly managed to do, barring the odd messy night. Been to a few music gigs, found my bearings, done a few touristy things. Mostly living the quiet life and unsuccessfully trying to learn Chinese.

Though I’m trying to live a more normal ‘Chinese’ existence than most foreigners do, I have to say BBC Redux and the iPlayer are godsends. I listen to (BBC Radio) 5live, 6 music, download Match of the Day, Attenborough’s Life programme, movies, and all sorts of other stuff. Keeps me sane!”

There’s more from Beijing on the difficulties and laughs around getting married here and about his own new blog here.