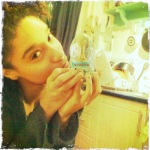 Time for something just beautiful. (I need it after the brilliantly horrible Roadkill yesterday.) Lianne La Havas writes and sings beautiful songs.

According a possibly unreliable source, she’s in her early 20s, is English, with Greek and Jamaican roots.

Here she is with Age – on why she is happy to go out with an older man – as long as he does what he’s told. (From Later With Jools Holland.)

And wandering through Paris END_OF_DOCUMENT_TOKEN_TO_BE_REPLACED

High time I took a break from my self-absorption (thanks Maxi) and shared some moving, joyous and simply bizarre goodies from elsewhere.

Parachute sex & frisky turtles from SamHenry. She usually keeps a beady eye on US politics and economics, but amorous airborne antics are distracting her. It’s a funny news story, played straight for more laughs. And then there are the turtles – very very… intrusive? C’mon, if you were a turtle, or even if you weren’t, would you want someone filming your orgasm face?

The Secret of Molten Lava from Kristina at Ten Minute Missive. Firstly, you get a nom-nom recipe for molten lava cakes – the result of a happy accident. Secondly, you get a brave, honest, moving and enlightening account of coping with depression. It’s better than I’ve made that sound.

wo books to read (& even buy) by Gerard Brennan at CrimeSceneNI. As well as being top bloke and providing a thriving online forum for the new wave of Northern Irish thriller writers (and some from south of the border, Scotland and the USA), Gerard also has Wee Rockets published as an e-book and The Point out in paperback. Oh, and if you want to hear and see him blethering on in person, he’ll be on a panel at Derry Central Library on Tuesday (Oct 18th) talking about the Booker Prize winner as the award is announced.

Still looking for something new and noirish to read – let Sean Patrick Reardon guide you. Don’t let the hat put you off. He writes himself – he’s the author of Mindjacker – but he also consistently links to other interesting new writers – lots in the USA, with a bias towards crime and mystery.

Póló falls foul of the tourism propaganda police in Dublin. Sure, tourist boards aim to put forward an appealing face of wherever they’re promoting. But when they announce a flickr forum and claim to welcome everyone to contribute with the sole proviso that the picture content is related to Dublin, should that bar the the inclusion of beggars? Should only the glitzy primped preened and sanitized version of the city by shown? Should Póló’s images be banned from next year’s tourism calendar? See for yourself here.

And finally…Liverpool Salad and Sheffield Panino. Add a foreign placename and a dish or phenomenon suddenly sounds exotically appealing. Wonder how well that would work if you were to encounter English placenames used in the same way abroad? Journo and travel writer Rudy Noriega did in Palermo, and reveals all at his Gullible’s Travels blog. Made me smile anyway.