It took a soldier with a huge brain inside an outsized head to solve this security problem.

Last Saturday I set you a puzzle to solve. It was a security dilemma that sent a military guard at one of London’s Olympic venues scurrying off to find his sergeant. I laid out the scenario for you here, and asked you to guess what the sergeant decided to do – or what he should have done.

And I offered a prize for the correct or best answer – a CD single, I love the noise it makes by Declan Sinnott.

If you haven’t already, you can still have a guess. The original dilemma is described here.

But it was basically whether or not a spectator could/ would/ should be let into an Olympic venue with bottles inside which the water was frozen solid – keeping in mind that it’s forbidden to bring in liquids.

Here are some of your suggestions as to what happened END_OF_DOCUMENT_TOKEN_TO_BE_REPLACED

Olympics Part 2 – Can you solve this security dilemma?

The security at London Olympic venues is now being provided by soliders. As far as I’ve heard, they’ve been polite, reassuring and quite hot. Phoarr! (That’s according to one Olympic volunteer anyway.)

But here’s a security dilemma that left the soldiers scratching their heads. And there’s a prize for the best (or correct) solution supplied by YOU.

It was like this: The first military searcher could not decide. He called in his sergeant. The sergeant pondered a while, before eventually coming up with a verdict.

The puzzle is coming up in a moment. But your challenge, dear reader, is to tell me in the comments below, what you think the army sergeant decided. (You’re also welcome to say what he should have said or done.)

So here’s the scenario:

A parent with accompanying children arrived at the entrance to the Olympic venue with two full plastic water bottles.

The rule is that no liquids are allowed to be taken into the site. (For security reasons. Free water is available inside. Empty vessels are permitted.)

But this resourceful parent, anticipating a hot thirsty day, had frozen the water bottles overnight. As it happened, the day was overcast, and chillier than expected – and the ICE HAD NOT MELTED END_OF_DOCUMENT_TOKEN_TO_BE_REPLACED

Now look what you’ve done. You’re famous. That’s you – readers and commentators. You have only gone and become online exemplars who have made “clear the sort of support you can get from a virtual network in a connected world.”

That’s according to the highly prestigious Trading As WDR blog. (“A blog containing thoughts about change, and how to achieve it…”)

WDR spotted what’s been going on here recently and has drawn attention to it.

After such high achievement, you deserve a special treat.

Give me no answers

That’s all they ever give me

But to cut a long story short, this is the moment you start getting answers. Three answers. (Four if you count the last one double.)

First, I’m going to reveal to you the answer to the question that has been bugging you since childhood. END_OF_DOCUMENT_TOKEN_TO_BE_REPLACED

Filed under blogs, media, My Writing 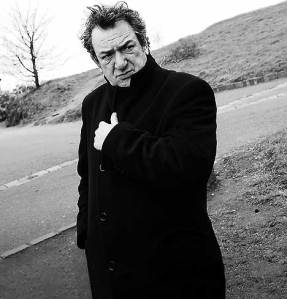 Rebus. (As played by Ken Stott.) Looks pissed off. Perhaps he's contemplating his imminent departure from the job?

Synchronicity? Serendipity? Or an unfortunate coincidence?

I’ve been working for a large organisation for many years, doing all sorts of stuff in different areas. But now, I’m a few weeks away from finally leaving. It feels like a big deal. A big change for me.

It so happens I’m reading Exit Music by Ian Rankin at the moment. The main character is an Edinburgh-based Detective Inspector called Rebus. (Sure, many/most of you will already know that, but there might be someone who doesn’t.) It’s one of a series of novels with Rebus as the central character. They’re very good.

But the point is this: In Exit Music, the story takes place over Rebus ‘s final week in the police force. His impending retirement hangs over everything like a dirty cloud threatening to burst – over his attitude to colleagues and his job, his thoughts of legacy and other players’ attitudes to him.

So I’m worried that it’s exactly the wrong thing for me to be reading right now. It has passages like this:

That was that, then. End of the line, end of the job. These past weeks, he’d been trying so hard not to think about it – throwing himself into other work, any other work… For three decades now this job of his had sustained him, and all it had cost him was his marriage and a slew of friendships and shattered relationships.

Bit depressing. And then there’s this:

‘Just one last thing.’ His next three words were spaced evenly. ‘You … are … history.’

‘What I want you to do, Rebus, is crawl away from here and tick off the days on the calendar.’

Obviously none of those invitations to be maudlin have the slightest effect on me at all. I’m marginally less crumpled than the picture above. And the outlook here is resolutely sunny. Oh yes.

Anyway, while we’re on the subject of rebuses. Here’s one that was prepared earlier.

Not only does it predate Ken Stott, but also that unfortunate interlude involving the otherwise fine John Hannah.  Scroll down below it for a surprising (if true) fact about Ken Stott.

This hieroglyphic puzzle, or rebus, is dated 1811. Go to the Puzzle Museum website to solve it. Click on the picture.

Apparently Ken Stott used to be in a band called Keyhole, members of which later went on to form the Bay City Rollers. Narrow escape there, Ken. On the one hand massive stardom and record sales. On the other, they were awful and legal dodginess followed. They were awful, weren’t they?

Filed under life, What I'm Reading