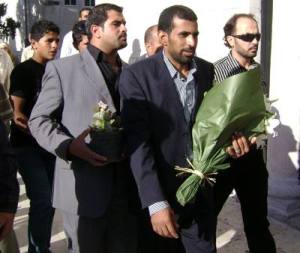 The original caption in the Jordan Times reads: A group of young Muslims heads to the Greek Orthodox Church in Abdali on Monday (Photo by Thameen Kheetan)

This is very cool. Good lads. And good woman who told me about it.

Here’s the original article from the Jordan Times (14th September 2010) – by Thameen Kheetan:

AMMAN – A group of young Muslims on Monday offered flowers to Christian clergymen in Amman as a gesture of “peace and coexistence” against the backdrop of a Florida pastor’s recent threat to burn copies of the Koran.

“Shall we burn a copy of the Bible as a response to that? END_OF_DOCUMENT_TOKEN_TO_BE_REPLACED