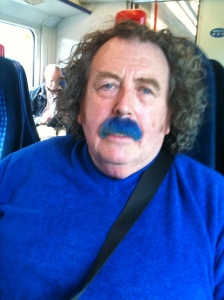 The father of the bride

I met this man on the train. He had a blue moustache which matched his blue jumper.

Apparently he dyed it red, white and blue for Britain’s Diamond Jubilee celebrations.

Now he has it blue to match the bridesmaids’ dresses at his daughter’s upcoming wedding.

Strangely enough, she’s not keen on the idea. But he figures it will lighten the mood and take her mind off stressful wedding planning. What a considerate dad.

Actually, he is considerate. He’s going to shave off the moustache completely.

And then replace it with a stick-on version.

Which he plans to dramatically rip off during the wedding reception. During his speech I imagine.

This is why I talk to people on public transport.

I wasn’t sure what title to give this post. Perhaps you can come up with something better than “wedding blues”.